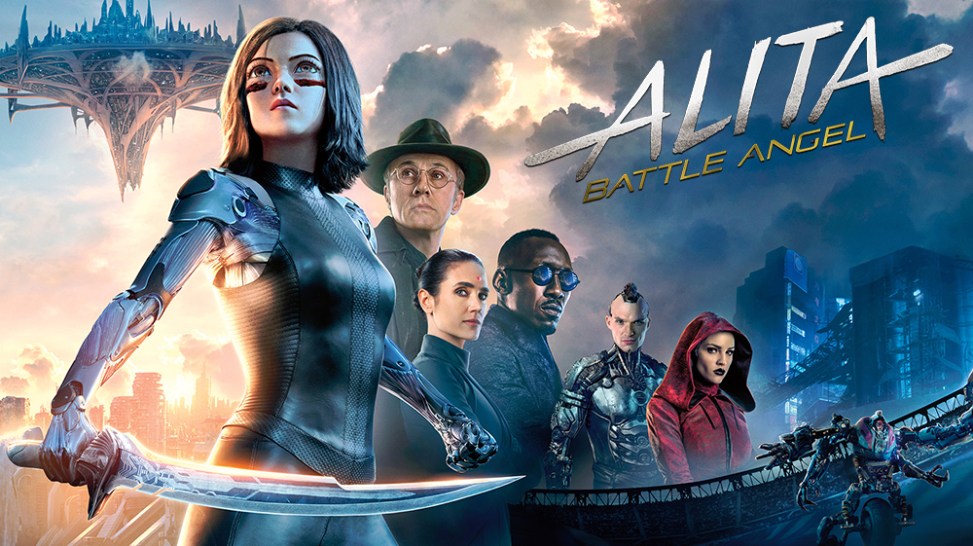 I won’t be lying to you, I really apprehended Alita : Battle Angel those past few months. American adaptations of Japanese manga often are disappointing (and bitter failure, both in critically and financially) and the ambition was so big enough to allow a $200 billion budget to a producer used to small budgets, but it never was a good idea. How many filmmakers failed trying?
Moreover, I must admit that I am not a fan of Robert Rodriguez’s filmography, his work always made me impervious.
And finally, despite some minor imperfections here and there – I will of course come back to it – Alita : Battle Angel appeared to be a great surprise. Robert Rodriguez deliver an admirable work, an entertaining blockbuster with a crazy, unpredictable and indomitable energy a visual richness.

The first things hitting us in Alita : Battle Angel are its special effects and its photography.
Alita : Battle Angel has a string visual identity, maybe even the most resulting among Robert Rodriguez’s filmography. A photography swinging between the mechanically stunning and the divine with this inaccessible, triumphing and above-the-world Zalem, in the way of the Olympus where the mere mortal never are invited in.
Moreover, Robert Rodriguez never really shows Zalem, he suggested it, giving the place a mystical feel and an unreachable dimension supported by flashbacks and the final scene depicting everyone who failed trying to enter without authorization.
Only Zalem, survivor of the Earth, is so precious that it needs to be protected as a dictature and create a hierarchy where only the deserving ones could have a great life, as an echo of our actual society.

The stage-sets are also stunning. Unlike the latest Star Wars, a huge majority of Alita : Battle Angel’s stage-sets, the one in the middle of Iron City have been made from scratch (in Austin, TX, inside Robert Rodriguez’s hangars) and thus the green screens and this “all-digital” feel are a lot less noticeable at the screen which is appreciable to better apprehend the show this movie offers to our eyes.
However, as often in these cases, we can feel the actors trapped in a linear stage-set, forced to follow defined paths, a feeling of imprisonment that perfectly transcribes the feelings of the characters, trapped in a city with limited hopes.Regarding the « suits » and designs of the characters, Alita’s pieces are a beautiful piece of artistic composition. Her first body had a childish and fragile look with pure colors (white) which highlights the character’s innocence due to her memory loss but also her first steps in a world she has to re-discover. Whereas her second body, more organic gives the feeling of an accomplished woman, the birth of a warrior.
Two bodies then, for two different lifestyles which comes up at precise moments of the story. An evolution of the body that makes sense and is not only an aesthetical choice.
For the other characters, everyone has a « gadgetified » body, however Zapan’s one is the catchiest. Indeed his body carries ancient cultures writings – maybe Maya or Inca and a Persian looking sword – just as if he was the representant of long-gone civilizations trying to carry on their greatness.

Hugo and Alita : The Battle of the Hearts

The love story between Alita and Hugo is not that uncertain as some critics tend to make us believe. And even if Keean Johnson’s interpretation is not that good, their relationship is there to bring a more human feel to Alita in order for us to attach emotionally to a character which can easily become unsympathetic because of her robotic structure.
And even if the few twists tied to this loving-plot are predictable, due to its scenario composition, it spares us from the sadly famous « happy-ending », giving a deeper dimension to this « Relationship » which final outcome will change Alita’s life and future choices forever.

The Motorball : A Motivational Source

I’ve never read any Alita : Battle Angel manga, but from what I could read here and there is that motorball is an essential and capital element in Alita’s development/reconstruction since she’s linked to Jashugan’s arrival who will turn upside-down her life (we saw him briefly and he’s said to be the super-champion).
Here the motorball is more like an artifice, a spectacular element. But, between You and I, it’s so spectacular that we can forgive its « therapeutic omission ».
The chase between Alita and the other « Machine-men
» has a breathtaking beauty, every movements being chosen to deliver to the public a grandiose show throughout well-mastered astonishing choreographies swinging from slow-motions to fast-actions scenes which gives the whole thing a breath-taking immersion in this dangerous sport.
This sequence is even more thrilling since its rhythm has a double-stake : make her first step in order to hope for becoming a champion and then reaching Zalem, but also saving Hugo’s life which is being chased by Zapan.
At the end of the movie, Alita uses Motorball to establish her reputation and this defy Zalem’s supreme authority. This challenge is like a call to riot with Alita’s sword turned up to the skies. A blueish sword which might represent the Dreams and the Truth, two aspects given to the color blue Alita is looking for : to live her utopia and expose the truth to Iron City’s citizens.

Alita : Battle Angel’s promotion put the accent on a plethora of villains but unfortunately the result was a bit disappointing. Robert Rodriguez’s movie lacks some sort of final boss in order to put Alita’s character to the test. The young woman is so powerful that we never fear for her (unless during the Motorball great scene where the tension is well mastered to make us forget her strength due to the dramatic stakes of the outcome) and the many villains she has to fight are turned ludicrous (Zapan, Grewishka) or die in a single scene (Zyssiana) which is frustrating for us to have such short apparitions.

Regarding Mahershala Ali’s performance, I’m quite divided. Ali is an actor with a certain charism, but he’s put at the back here, just like a mockery. However, despite its obvious defaults in every single apparitions, thanks to his posture and his charism the actor shines bright and only few actors can be proud of saving a character’s interpretation by simply counting on their « big mouth ».

As a conclusion, I’d say that even with its little imperfections, especially in the dialogues that gives the film a
« teen movie » feel, it was brilliant. Alita : Battle Angel reaveals itself during the action scenes which visuals are simply astonishing at a crazy rhythm. A blockbuster entertaining as well as thrilling.
Robert Rodriguez’s movie is seducing, especially due to the technical motion, the unique takes and the motion which holds in abeyance the limits of the cinema.
To this day, we can say that Alita : Battle Angel is the most accomplished Japanese adapted American Blockbuster and, now that it has set up the bases, the following is now awaited in order to fulfill our expectations.

2 thoughts on “ALITA – BATTLE ANGEL : MY REVIEW (IN ENGLISH)”