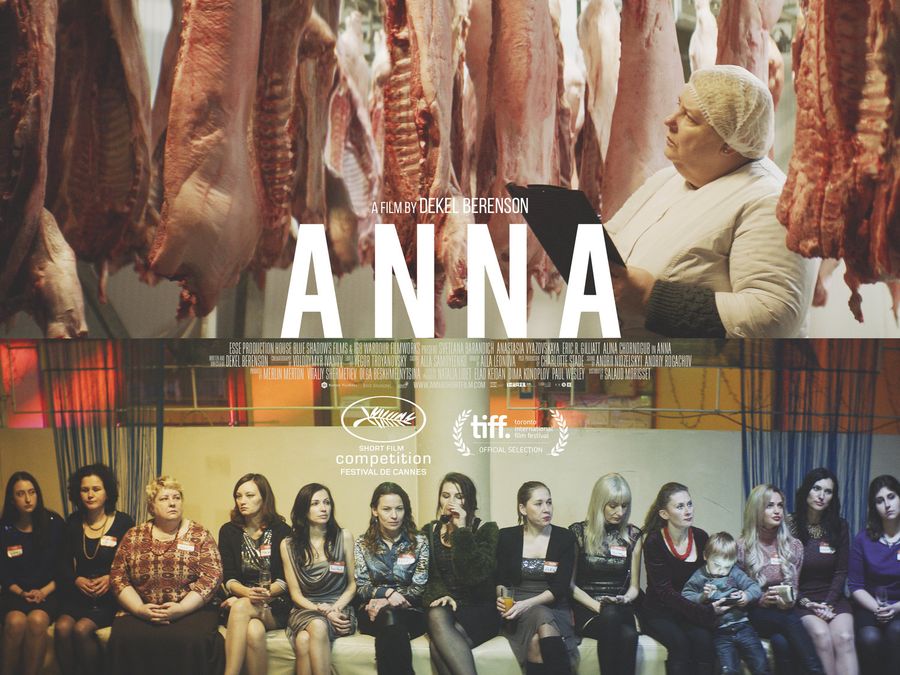 The director Derek Berenson is making the headlines again with his third movie : Anna. This movie, which was supposed to be presented on the occasion of the 72nd festival of Cannes, is next in line for the Oscars 2021. Interview of Dekel Berenson, a brilliant director.

Synopsis
Anna, a middle-aged single mother, lives in a small industrial town in war-torn Eastern Ukraine. She works in a meat processing plant, lives in a rundown apartment and dreams for a better life for herself and her 16-year-old daughter.
Desperate for a change, she is lured by a radio advertisement to attend a party organized for foreign men who are touring the country, searching for love. Despite not having been out for years she decides to take part in the event.
At the party, Anna is confronted with the realities of old age, with the American men’s real intentions, and by her underaged daughter who is also attending the event. Both mother and daughter realize the absurdity and indignity of the situation and abandon their dream for a better life.

The film features the character of Anna, a single mother who dreams of a better life. She decides to participate in a party where foreign men travel the country in search for love. Where did the desire to tell this dating story come from ?

Nine years ago I traveled in Ukraine for more than a month spending a few days in each region. I got to know the country, its people and history. In Ukraine these parties are pretty known as they’re being organized since the 1990s. Four years later when I started making short films, I wrote dozens of ideas for shorts and then developed several of them into scripts. I then realized that the best ideas had several themes in common and decided to make five short films about five women of different backgrounds and ages, each from a different part of the world. The plan was to make one, get rejected by all the festivals, then make another and another… until finally I’ll have five of them which could be viewed as a feature. The first segment is called Ashmina and tells the story of a 12 years old girl who packs the paragliders of foreign pilots in Nepal, and is based on my experiences traveling in the country (I’m a paragliding pilot…). As soon as I finished Ashmina, I flew to Ukraine and started working on Anna. I’m now busy turning the 3rd part of the project, which was meant to be a short too, into a feature. I’ve been extremely lucky to have my short films screened and noticed… but it was also a ton of crazy hard work, living from a backpack for years, and a constant struggle.

This phenomenon of men who go looking for a woman abroad is quite common. In Anna, they are Americans. How do you explain that these men are forced to go to other countries (often Eastern Europe) in hope to find love ?

I don’t think that they are « forced » to do anything. They can meet someone locally… but in their minds, they will get a much better « deal » if they fly to Ukraine and meet someone who is desperate to leave the country and move to the USA. Because in their minds these women would be « desperate », they think that they will get a better « deal » (just like Donald Trump….) someone who is more attractive and maybe more obedient than they would if they date someone local. By flying to Ukraine they gain a « social edge » which they wouldn’t have locally.

The women don’t try to take advantage of anyone but more of use the situation. They see an opportunity to better their lives and hope to meet someone who would be both a nice decent person AND would offer them a chance for a future.

The character of Anna, during this event, also faces the passing of time, the aging of her own body, was it also a desire to address these themes in your short film ?

Yes of course, it is an additional theme in the film. Anna is very different from the other women that we see in the party, she is older and not as attractive in traditional terms. But, of course, older and less attractive people have dreams and wishes and needs just like anyone else, and I wanted to put a spotlight on this issue. I also wanted to show Anna, despite her old age and less attractive feature, as someone who is actually beautiful too, and I think we succeeded in that.  For example in the scene when she is dancing on her own, and when she is preparing to go out to the party sitting in her underwear, which has a beautiful painting inspired quality to it. There is something beautiful in Anna, I don’t think anyone can deny that. Anna radiates good heartedness and positivity, I hope I was able to make that point come across.

Earlier, I was talking about Eastern Europe. It’s not only the Ukraine that organizes these « little arrangements ». Why did you choose Ukraine to develop Anna‘s action ?

These parties take place in many counties but I think they are mostly known around the world as taking place in Ukraine. As mentioned above, I was also traveling there and have Ukrainian roots, it was a classic choice and I think it worked out.

The actress Svetlana Barandich is very touching. What attracted you to her, to give her the role ?

When I wrote the script I had an idea of who I was looking for, and as soon as I met Svetlana, I knew that she was the right person for it. We had auditioned more experienced actresses but it didn’t matter, I had looked for something specific and Svetlana embodied that perfectly.

Anna was in competition at Cannes last year. I imagine being selected must be a great source of pride?

Yes, it’s a bit sad but the truth is that without being selected in a big festival such as Cannes, it’s almost impossible to get noticed, unless you’re born into a family with a lot of connections, or if you know the right people etc, which I didn’t and wasn’t. My only chance to ever get noticed was to be selected in such a festival, and I was ready to make 10-15 short films until that would happen. On the day I received the email from Cannes that Anna was selected – I was already working on my next short, I was sitting in a café waiting for someone who would be a producer on the project, and that was our 2nd production meeting. I was fully ready to ramp up my efforts and to make 2-3 shorts per year if needed. My 2nd short Ashmina was shortlisted in Cannes, Venice and Sundance so I knew that I was very very close and that it WAS possible, despite the odds being incredibly low. I was also traveling while making these films, learning the process, teaching myself filmmaking… meeting people and making new friends. I was having the best time of my life, despite (or maybe because?) of the hardship and difficulties, so I didn’t mind it and was looking forward to keep on going.

The short film is also eligible for the 2021 Oscars. Have you heard from it? Will it finally be in competition ?

I’m an Academy member so I actually get to vote for the Oscars… The voting starts on February 1st and if I remember correctly the shortlists are announced on the 9th or something like that, so we will know if we made it to the next stage soon.

You are currently working on two other projects, « Abel » and « David ». I’ve noticed that some of the films have only first names. Do these names have a special meaning for you?

Yes, David is my middle name, that short is semi autobiographical as it’s about a backpacker that is « lost » (sort of), which I never really felt myself but is part of the whole backpacking experience. I’ve been a backpacker for years and that short tries to capture that experience. It was actually shot 3 years ago, as a preparation shoot for Ashmina, and I just waited with finishing it for different reasons.
Abel is also meaningful because it sounds like « able », you’d have to watch the short in order to understand it.