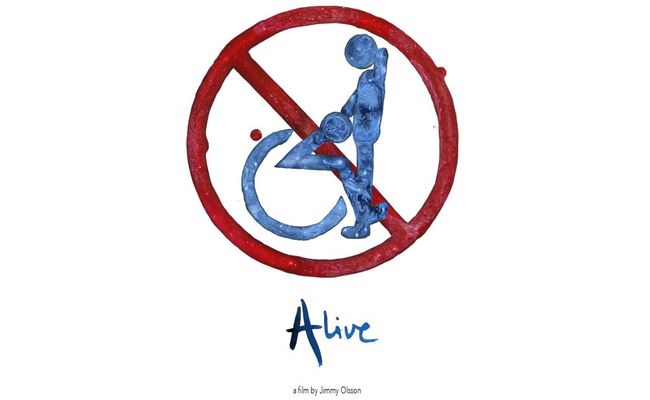 Nominated and winner of several prestigious awards at international festivals, Jimmy Olsson’s Alive is a poignant short film about the life of a young disabled woman, Viktoria, who longs for more privacy. Without caricature but with simplicity and sincerity, Jimmy Olsson manages to raise awareness about a major societal problem : the abandonment of disabled people and their desires.

Viktoria is played by actress Eva Johansson, whose breathtaking performance and moving interpretation will earn her the award for Best Actress at the Short Shorts Film Festival & Asia in 2020.

Synopsis :
Victoria is disabled and she yearns after intimacy. Her assistant Ida offers to help by making a Tinder profile. Victoria gets a match but the guy she is matching with is very shady. Ida gets worried what might happen if they meet

What made you want to make a short film about a disabled woman’s desire for more intimacy and access to sex ?

I guess from the beginning when I heard a story in a podcast little over a year ago I found a similar situation really interesting to tell. Then filmmaking for me is therapeutic work. In every film I make there is a small part of myself so with that said I want to disconnect myself even more for every film I make.
Alive is about prejudice, love and intimacy. This was a story where I connect to a woman from a part of the society, I didn’t know much about, but I wanted to know more. I wanted to get inside her and feel what she felt. No to be seen and loneliness and prejudice are topics I really can relate to and want to explore even more. Also, this is a topic I haven’t seen before really so I guess that was one aspect I wanted to find out more about as well.

In Alive, it’s her caregiver Ida who will register Viktoria on Tinder. Why this choice? And why didn’t she choose to talk about sex assistants ?

I think Ida wanted Viktoria to feel like a normal person you know, to be a part of the same society as she is. And I also think Ida sees what she feels inside apart from many others who want to « solve » the problem. Sex assistants may be a good solution for some people but in this case I think Viktoria wanted to be able to have agency over her own body and to decide for herself.

What is your opinion or point of view on the subject ?

I don’t think there are many people who really want to sell their bodies but I am sure there are some of them who really enjoy it, on their terms for sure. On the whole I am not for the idea of selling your body but it’s a bit tricky with this case when you have people who just want closeness and really cant get it anywhere else. There is something wrong in the principle to have an arrangement when it comes to give away, and sell the most intimate thing we as humans have really. I don’t have a good answer.

There’s a very striking scene that pits two lifestyles against each other. The one where Ida lives a normal couple life and makes love with her boyfriend while Viktoria is alone. It’s a devastating loneliness. Is Alive also the desire to show that a disabled character is a normal person ? That she can live normal intimate moments without needing « help »? Moreover, the final scene perfectly shows this normality since Viktoria – with a sense of humour – confides to Ida that she won’t see her « Tinder Match » again, because he’s not her type.

Well yes, to me Viktoria is perfectly normal. She is funny and witty. She just has a condition where she has trouble speaking and moving really. Inside she is just as everyone else and that was mainly what I wanted to create with this film. I think a lot of us able bodied people judge disabled people on their appearance and think that they are like that on the inside as well which they are not.
With the last line I wanted to give Viktoria agency of her own body and self. She gets to decide what she wants and I like that.

That’s also the beauty of your film : we sometimes forget Viktoria’s handicap. It’s like watching conversations between two friends, who have very normal conversation topics. Ida also takes care of her like a real friend (she worries about Viktoria inviting a man to her house on the first night).

Exaclty. From the beginning me and Madeleine Martin who plays the character Ida talked about that she is not the usual caregiver, perhaps she is not properly trained to be one either. She is still a warm person who still sees Viktoria as a person instead of a client. The wittiness of Viktoria opens Ida up, I think. Viktoria is smart and knows what she wants. I think Ida is worried about the Tinder date both as a friend and as a caregiver. One of the things that got me interested in making this film was the question : who is responsible if anything bad happens in a situation like this ? I wanted to combine those feelings. Both as friend and as a caregiver. That moral dilemma really.

Feelings of loneliness are all the more topical with the COVID-19 crisis. Is this a subject that concerns you even more today ?

Well yes I would say so. Humans shouldn’t be alone. Its not healthy for us. I saw this documentary recently that when people are really lonely, its like smoking 15 cigarettes per day so that is not good obviously.

The actress Eva Johansson is breathtaking in the role of Viktoria. Her performance is incredible. How did she prepare for the role ?

Eva and I spoke about who she were before the accident she had. She is not born with the disability. We talked about her perhaps being a boxer before but on the other hand I didn’t want to make a statement against boxing really. She did a lot of research for the part. She read a lot and watched a lot of videos. She did that for about 6 weeks, not too long really but she was really dedicated. And yes, she is incredible !

The music at the end is beautiful…

Peter Gregson wrote the last piece of music. He is a wonderful musician. He wrote Bach recomposed and I asked him if he wanted to write something classical but hopeful in the end and Its also very warm and powerful. I just love the music.
Thomas Henley wrote the score for the middle part where we see Ida and Viktoria separated and I wanted a felt piano feel to those scenes and then he wrote the part where Ida is waiting outside the building and I wanted something exciting and thrilling almost and I like the fact that it starts when Viktoria is desperately screaming out her desperation.

What are your plans for the future ?

Right now I am writing two features and two tv series. The two series are coming along quite well. They have been developed for some time together with the broadcaster in Sweden and they seem to like it still so that’s good. The two features are in the beginning of their processes. They are more arthouse and that is hard to finance but they are really exciting projects. One is called Outside Lyon and is about a refugee woman who is forced to work as a sex worker in Berlin. She has no legal documents. One day an up and coming politician comes in and asks her for a prostate massage and she reluctantly agrees to it but quite quickly she aborts it and throws him out of the room. She feels something that is going to change his and her life altogether.

The short film is available in integrated below :