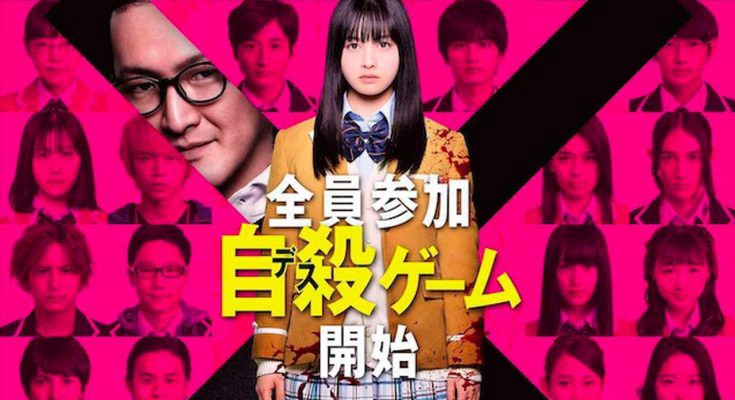 A comic book enthusiast, director Lisa Takeba did not take the easy option by directing the adaptation of Arata Miyatsuki’s manga: Signal 100. A dark story in which a teacher forces thirty of his students to participate in a macabre game. Hypnotized, they have 100 actions (such as crying or laughing) not to perform, implanted in their brains, otherwise it’s suicide! But the problem is that they don’t know the 100 signals, and the one who will see all his friends end their lives… will survive.

Freedom is not free

Lisa Takeba will opt for scenaristic options that diverge from the manga in order to adapt her story for the big screen. The first big change concerns the character of Sensei Shimobe. In the work of Arata Miyatsuki, the teacher (from what I could read) is a teacher “martyred” by his students who, to get revenge, decides to engage in this deadly game. In the film, Shimobe is not presented as a submissive person, mistreated by his students, on the contrary, a kind of benevolence is palpable among them.
His intentions are then more obscure. He seems to want to act for their own good, to give them a life lesson about freedom and the moral choices that each of them could be confronted with after their studies, in the real world, the adult world, an unscrupulous world. But finally, the choice of “suicide” is not insignificant. There is behind this word, a bloodier truth, which I let you discover.

The direction also adopts a fast-paced narrative to immerse the viewer in a real hellish turmoil, like these young teenagers trapped between their moral sense and their survival instinct. Lisa Takeba confronts her audience with a gory spectacle, without trying to hide or conceal the students’ “suicides”. We have to endure, helplessly, like the students, this desperate struggle for survival. At the same time, it would have been foolish to self-censor. The very essence of the manga would have been affected. Yes, the film shocks, the sensitive souls will close their eyes, but this is what makes Signal 100 an effective and formidable production.

In the so-called “grouped” films or series in which there are several protagonists or heroes, each character usually has a gift, a particular talent that makes them unique and allows them to get out of a place, solve a problem, an enigma. A way, among others, to allow a clear identification of the roles they are about to play, but also for the spectator to have a particular affinity for such or such character according to their own personality. In short, an emotional attachment. Thus, we are fully invested when our hero (or villain) goes through painful, strong moments. This is what we call characterization.
In Signal 100, Lisa Takeba touches on the identity of her high school students. She never exploits their lives, their deep personalities to give the stakes of her film a powerful dramaturgical scope. The audience witnesses a succession of suicides, certainly successful in their staging, but only sees a gory butchery lacking emotions. They only feel the physical pain of the actions. Without characterization, without offering a minimum of emotional attachment between the characters, it is difficult to transpose to the spectator the sorrows, the pains that the heroes will feel to the death of their friends.
[SPOILER] However, we notice that some “signals” are linked to the personality of each person. Lateness, using  a cellphone, looking at each other for too long in the eyes, so many elements linked to the suicides of some students. However, these scenes are so expeditious, so under-exploited that, here too, we become hermetic to any emotion. Except the one of a retch. [END SPOILER]

This lack of clarity in identification brings a new problem: heroisation.
From the beginning, we know that the heroine of Signal 100 will be Rena Kashimura: it is her who is highlighted on the promotional poster, the camera is often focused on her, special attention is directed to her, her behavior, different from the others’, has a narrative logic. From the innocent girl, the ordeals will forge her new identity, until she becomes the heroine.
Nevertheless, apart from these few pieces of information (her shyness, her clairvoyance, her desire to go to law school…), we have no other information. Like her classmates, she has very few characteristics. Throughout the film, her past, her desires, her future, her relationship with others, everything is brushed over as if defining her had no interest. So we end up asking ourselves: why her? Any student in this class could have been the sole survivor.

However, was the purpose of the film to move? One might ask. Works like Signal 100 are there to deliver punchy, shocking, stomach-churning entertainment. But as a critic, there is always that regret that authors forget to combine the story of the characters with the overall story.

Although Signal 100 suffers from a light writing on the scenario composition of the protagonists, Lisa Takeba’s film remains nevertheless an intense and tragic survival. The heavy atmosphere and the permanent tension which reigns in this high school are enough to keep the spectator in suspense and to omit the flaws.
A barbaric, savage and hard-hitting show, even daring, where it is difficult not to imagine the horror of such a situation.