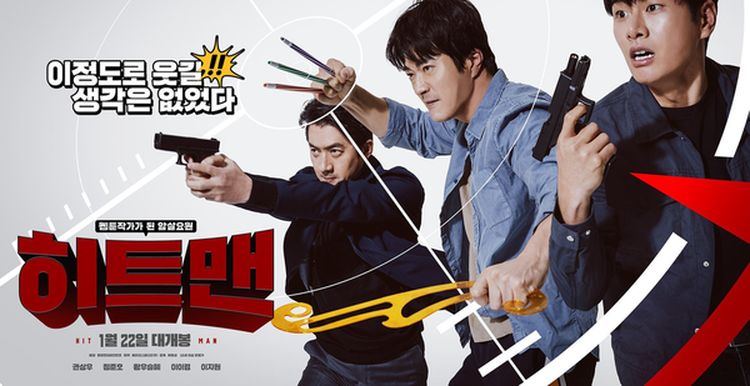 Storyline:
In order to fulfill his dream of becoming a cartoonist, a highly trained antiterrorism spy decides to fake his death during a mission.
Fifteen years later, he mistakenly publishes a comic book about his life and reveals sensitive information.

South Korean cinema will never cease to amaze us! It must be said that the BIFFF – like almost all festivals today – gives it a special place with a category specially dedicated to it “Taste of Korea” where no less than 8 feature films are available, including Hitman: Agent Jun.
New film by Choi Won-sub, Hitman : Agent Jun is a colorful and crazy South Korean spy comedy, a mix between animation and live-action. A dose of good humor that is accompanied by a dynamic execution but especially a scenario that raises strong societal themes…

Giving up on his dreams?

From a young age, Jun has been dreaming of only one thing: drawing comic books. Orphaned after a car accident, he is recruited by a government agent to join an elite antiterrorism team: the Shield Team.
Jun is just a child when he is confronted with this man who will literally break his deep desire to become a cartoonist. And there is an interesting aspect in this first sequence, because it reflects an absolute truth, a brutal truth that still dominates some civilizations: “Art will not make you a man and will not contribute to the greatness of your country”. More than shattering his dream, Deok-gyu spy confronts him with a reality, a responsibility, an ideology that he is not even aware of at his young age and that no child should have to bear. Childhood is precious. Dreams forge our personality, our future. By discrediting his imagination, his creativity, Deok-gyu thus begins his work of transformation. He distills in Jun’s mind another path, to follow the footsteps of his deceased father and thus make his country, South Korea, shine through noble actions.
The result is Agent Jun, the best in the world of espionage. But, in a corner of his head, the orphan will never stop wanting to be a cartoonist.

This is probably not intentional, but it echoes what we are currently experiencing with the pandemic crisis and the way culture is treated in some countries like France. Non-essential. This is how we have come to qualify Art. More than ever, it is essential. To feed a country, but above all to be free. If Jun decides to program his own death and to leave this world of violence, his “comfort” (salary, house…), to give up in some way on a false ideology that expects Art not to contribute to the glory of a country, it is simply to be FREE. Free to express himself, free to dream all the time, free to tell stories – and, de facto, to make other people dream -, free to denounce.
This is the scope of Choi Won-sub’s message: to fulfill one’s dreams is to be able to emancipate oneself, to free oneself from oppression.

Fifteen years later, Jun is married and has a daughter. His webtoons (online comics) are flops, he is the laughing stock of the web, he is a loser living off his wife (a reproach that will be made regularly). An untenable situation that Ga-Young, his daughter, reproaches him.
Here, the director Choi Won-sub tackles another theme: the economic impact (of dreams) on family life.

Show Me the Money

Making a living from one’s art is not an easy thing to do. Indirectly, those who suffer the most from it are the children. Here, it’s Ga-Young, Jun’s daughter. Not that she is a spoiled or stingy girl. Let’s just say that she has a burning desire to see her family flourish. Besides, her rap entitled “Show Me the Money” is explicit: money solves all problems (or at least some of them).

In a country where success is important, where the man is the one who has to support his family, staging a father who is the opposite of the male figure, paternalistic, as the clichés still imagine them, is an interesting risk from a scenaristic point of view. This inversion where the woman carries the family single-handed, financially and morally, touches and moves. Her support is sincere and her rare reproaches have only one objective: to give confidence to Jun, to allow him to believe in his talent. It is paradoxical, but necessary. She will even be the trigger of his success by sending on the net the story of Hitman against the will of her husband.

Won Choi-sub builds his characters with a lot of empathy. Because, if the narration of Hitman: Agent Jun is delirious, the filmmaker never forgets the dramaturgical aspect of his story and the scope he wants to give to his heroes. An emotional scope to fight and denounce.

7th and 9th: Clash of the Titans

Hitman: Agent Jun is a tasty mix between animation and live-action. The strength of the direction is that in both aspects, it is squared like a real comic book. Each shot is thought as a comic book box, a feeling that is even more pronounced in the action sequences, where the choreography is precise and filmed to reinforce this impression of film-reading.

The proof is this scene (see image) in which the four characters are first filmed in wide shot and then, successively, in close-up. Each of them is then presented to us with a different sound effect or sound (lion’s cry, dog’s cry…), giving at the same time an information on the force and the determination which animates them, but also a comic power to the images.
A staging at the service of the story, of the characters, of the comedy as mentioned just now, but also of the action.

Hitman: Agent Jun also juggles perfectly between these two styles, these two arts. It moves from one to the other with great skill, releasing an energy, a creative intensity and a bold originality that does not leave anyone indifferent.

Hitman: Agent Jun is a delightful spy comedy that is more intense than it seems, sailing intelligently between humor, family drama and societal tragedy. Indeed, the film tackles powerful and universal themes such as: the abolition of dreams, the desire to create, the economic impact on the life of a South Korean middle class family, inheritance or filiation.
A little gem of this festival, Hitman: Agent Jun is a work as funny as it is dramatic, as enjoyable as it is moving.