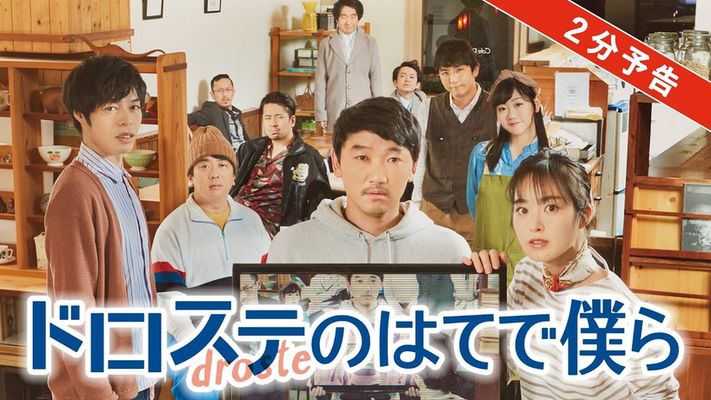 Beyond The Infinite Two Minutes is the first feature film directed by the Japanese Junta Yamaguchi. Behind this project, there is actually a whole collective: Europe Kikaku. A theater group with a lot of experience which started the production of this modest but very efficient first film, about paradoxes and time travel.
A work with undeniable qualities, as much on the scenic organization as on the scenaristic arrangement. Let’s decipher

2 minutes to change a life

The film starts with a discovery. Kato, a young café owner, is in his room when his “double” appears on the screen of his television: “I am the future you, I am two minutes later in the future…“. Intrigued, he plays along with himself. A crazy temporal odyssey follows, where other protagonists will intervene to feed a crazy behind-closed-doors and a story to make oneself schizophrenic.
The whole narrative structure of Beyond The Infinite Two Minutes is only held together by its final denouement and the kidnapping of the young woman that Kato is in love with. It is from this event that all the previous adventures make sense and that all the elements put in place previously have a use.

The ketchup bottle, the cymbal, the little zebra toy, so many small utensils placed throughout the story, which take their full extent in this rescue sequence as grotesque as hilarious. This is the genius of director Junta Yamaguchi: to persuade the spectator that their attempts, their numerous temporal round trips have strictly no interest, to deliver thereafter a succession of actions which justify all those previous. Clever and efficient.

An ambitious, dizzying mise en abyme, and a subtle mix of genres between comedy, science fiction and romance. This is the beauty and the intelligence of Beyond The Infinite Two Minutes.

Beyond The Infinite Two Minutes is also a love story between Kato and his neighbor.
Two people who no longer believe in the future, due to sentimental disappointments, among others. While everything seems to oppose them, including the music (and we understand why at the end of the film), a heart-to-heart discussion will bring them closer in this final where each one confides intimately. A tender moment that brings them together: fate has brought them together.
At this moment, neither the past nor the future seems to worry them. In fact, the film concludes when they decide to turn off one of the televisions, the one of the future. A daring choice as if to say: let the future decide for us, let’s live from day to day.

This is also the moral of Beyond The Infinite Two Minutes, what must happen will happen no matter what. If two beings are made to be together, nothing can stop them. The proof is, even without the TV, the young woman came back to the café to bring the cymbal to Kato. And even if a lot of things happened in the meantime, the fact is there: they found each other despite a first refusal.
For the rest, each one decides his own story.
To see the future is to comfort oneself in a form of laziness. It is to annihilate all risk-taking, to remain in a comfort zone. To live, on the contrary, requires courage. They had the courage to stop and continue without the help of their future.

Pastiche of time travels, extremely nice, for lack of more complex stakes. Nevertheless, the goal was to offer an original behind-closed-doors on the themes of time travel and temporal paradoxes with a different angle of attack than the usual productions of the genre. A success that holds thanks to a playful scenaristic composition – even if the beginning of the film is difficult, repetitive, even boring – and a last act where everything is connected with virtuosity.

[Update] : Beyond The Infinite Two Minutes has just won the White Raven and Critic Awards at BIFFF 2021.