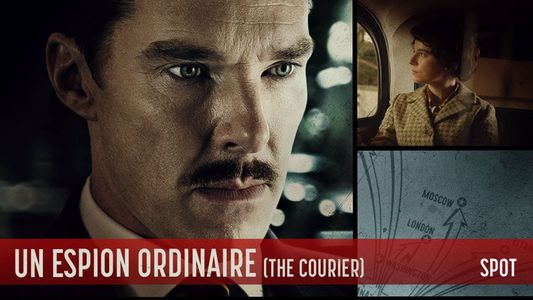 Released last Wednesday in theaters, Dominic Cooke’s The Courier tells the crazy true story of Greville Wynne, a modest English salesman, who finds himself plunged into the heart of the Cold War. At the request of MI-6 and the CIA, he forms a secret and dangerous alliance with Soviet Colonel Oleg Penkovsky. The goal : to provide the necessary information to the West to avoid a nuclear confrontation and defuse the Cuban missile crisis. He then begins a series of trips back and forth between London and Moscow, taking more and more risks…

Although The Courier does not revolutionize the genre in its structure, Dominic Cooke’s film nevertheless stands out thanks to its narrative, musical and directorial evolution. The filmmaker is above all a dramatist. This theatrical aspect, The Courier acquires it in its narration which looks like a Shakespearean tragi-comedy.
Indeed, the film starts with a certain lightness. Greville’s attitude is playful, gullible, the music out of step with the danger of the mission to be carried out (cf. Greville’s arrival at his hotel), as well as the staging, uncluttered, where the protagonists seem alive, expressive, grandiloquent.
The characters have fun : outings, aperitifs, opera. Greville, for his part, discovers Moscow while playing his businessman’s role to perfection. And then, everything changes.
The direction tightens, the music becomes more anxiety-provoking, the notes more aggressive, more dramatic and the characters turn inward, bending over, wary. [SPOILERS] : One scene shows this shift perfectly, that of the Opera House. In the first sequence where Greville and Penskovsky meet for a performance of Cinderella, we see them amazed, smiling, happy. In the second sequence of the Opera, in the last third of the film, everything sounds false : their enthusiasm (fake), their smile (hypocritical), their applause (insincere). The tension is then read on their faces. [END SPOILERS].

The way Dominic Cooke films Russia also allows him to increase the pressure of his film. Here again, the theater plays an important role in The Courier. The locations, the sets, the props, every little detail is thought to allow the audience to analyze the stakes of the film and the danger that the two heroes must face.
When the characters appear at the entrance of the imposing Russian administrative buildings, for example, Cooke films them in wide shot to show how they are crushed by the weight of these cold and monstrous architectures. Thus, it is easy to understand that this is not a small-scale spy mission but Greville and Penskovsky against a state, an entire Empire, where the eye of the enemy is as much the Russian population as the buildings themselves.
A tension that is also present in the closed places, which Dominic Cooke films in a very minimalist way to suffocate the characters and the spectator in this Russian hell.

Film productions dealing with the subject of the Cold War and the conflict between the Western and Eastern Blocs are legion in the cinema but necessary. The historical films between biopic and fiction highlight individuals, facts of history little known to the general public. Here, we are interested in the role of businessman Greville Wynne (recruited by the CIA) and agent Oleg Penskovsky who, together, were able to pass on to the CIA secrets about Soviet nuclear weapons and its spy service, thus allowing, during the Cuban crisis, to avoid a nuclear war. In total, no less than 5,000 pages of documents were passed from Russia to Great Britain.

A part of history that the school forgets. The role of art is often questioned, yet it is very clear. Cinema puts certain historical contexts into perspective, offers a showcase, a possibility to reveal unknown stories, forgotten truths, to show the world actors who, in the shadows, saved millions of lives during the wars.
It remains to be seen how much of this type of production is fiction and how much is reality. Nevertheless, it is then up to the spectators to make the effort of an in-depth research if they feel the need. The cinema opens a door, that each one is free to close or not after the lights are turned back on. This is the beauty of the 7th art, to cultivate ourselves and to cultivate ourselves.

Although used to historical films, Benedict Cumberbatch still surprises in this role made for him. He delivers a fair interpretation, without false note, as did his partners, Merab Ninidze in the lead.
The Courier has attitude, ideas, but above all, an aura. Dominic Cooke retains his experience in theater to shape an important film without superficiality. He directs his score like a real director to instruct and not to expose a big show film in the American way.