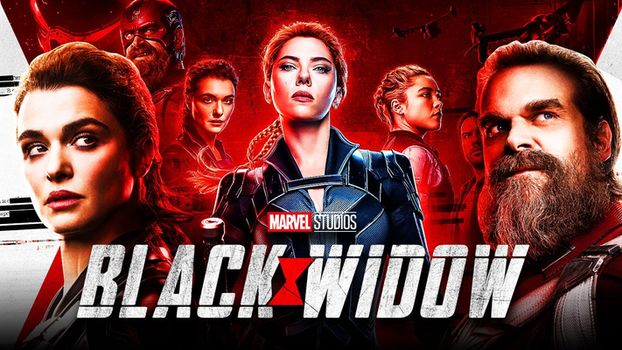 It’s been two years since we last heard the Marvel Studios credits in theaters, two years since we lost that feeling of excitement they bring when the lights go down.
At the first notes, an irrepressible joy took hold of the room. People were happy. On their faces, smiles to welcome the event. Whether Black Widow was a success or not, it didn’t matter, Marvel Studios had already won the battle.
For my part, and this is a duty as a critic, a certain neutrality must reign here. So, is Marvel’s return to the big screen a success ? Is Black Widow the long-awaited conclusion for Natacha Romanoff? Here’s the answer !

The history of Black Widow

In 2010, the general public and Marvel fans discovered the character of Black Widow in Iron Man 2, played by the brilliant Scarlett Johansson.
Two years and a few bruises later, she officially becomes an Avenger under the eye of Joss Whedon, whose task was to form the first superhero team in cinema. Although the treatment of Black Widow in Avengers : Age of Ultron is still controversial, the creator of Buffy the Vampire Slayer was able to give his heroine strength, determination, but above all a background and flaws while she was one of the few who did not have her solo film upstream to create her origin-story and deepen her heavy past. In two films, whatever we think about it, the director managed to give her a real identity, to position, to distill clues that we find today in Black Widow and allow us to better understand the personality and the deep wounds of Natacha Romanoff never evoked until now.
Budapest is of course part of these hints, the ins and outs of which we now know, in a particularly violent scene where the Black Widow takes the decision to kill Dreykov’s daughter. A film that comes too late ? Not necessarily. With this scene, Cate Shortland’s feature film puts into perspective the heroic acts that Natasha was able to perform with S.H.I.E.L.D. or the Avengers. This is the interest of this Black Widow, where Manicheism has no place. It reveals a Natacha Romanoff who is implacable but also full of humanity, where lack – in all its forms – has dug an immense void in her.

Placing the story after Captain America : Civil War was not an inherently bad idea. Black Widow is a movie about family, that’s the very heart of its plot. In this context, bringing the Avengers and their dissolution back into the discussion highlights the pain of having lost the family created by Fury and Stark and the yearning to want to save it at the end of the film, to « pick up the pieces ».
Deep wounds that will only get worse…

Black Widow is above all a family story. We discover that Natacha has a « sister », Yelena (Florence Pugh), a father (David Harbour) and a mother (Rachel Weitz).
Although it is a family founded by the Russian government, a certain attachment between them has developed over time. Feelings that are difficult to reveal, especially through indoctrination that leaves no room for emotions and love. The main thread of Black Widow is therefore to reunite, to rebuild this « family » against a state that has taken away all humanity. A painful emotional journey where reproaches, resentments, disappointments are unpacked in a rather touching reunion scene.
The humor of Marvel Studios sometimes spoils these small intimate moments and the clumsy side of Red Guardian annoys. But there is in the father’s heaviness something innocent, touching, modest, which touches. Moreover, the more the story progresses, the more Red Guardian acts as the pillar of this family and no longer as a mentor.
The relationship between sisters is also very interesting. We feel a real chemistry between Scarlett Johansson and Florence Pugh, which sublimates the moments when they share the screen together. In the action, where the verbal jousts are amusing, but also in the more intimate sequences, disturbing and authentic.

Natacha’s past is apocalyptic.
The viewer also learns that Romanoff’s real mother sought her out and that Dreykoff had her shot. An additional pain. And a way to confront the spectator with the cruelty of the Russian Empire and its methods to dominate the West at all costs. Despicable processes that go from kidnapping, to the creation of merciless slayers, to the death of recruits too fragile or people about to reveal the secrets of the famous Red Room. One can reproach the Marvel movie for its mainstream appeal, however, there are images and words of great violence (admittedly, toned down when it comes to evoking the fertility of the Widows, but I will come back to that).

This was one of the biggest regrets of Endgame, the absence of a proper funeral for Black Widow. A missed appointment with tears that Marvel Studios tries to fill as best as possible. Unfortunately, the emotion that would have been provided by a funeral in Endgame with Tony Stark is not present in any way in Cate Shortland’s film. Yelena’s recollection at her sister’s grave is here only an excuse for a post-generic scene that, while it sets the stage for the future Disney+ Hawkeye series and the beginnings of Allegra de Fontaine’s intentions, never has the emotional impact it should have.

Coming back to Hawkeye, let’s hope that the script of the series is not a banal story of revenge and that Allegra’s lie is not used as an alibi for a cliché eight-hour scenario where a good discussion between Clint and Yelena would be enough for the latter to understand her sister’s sacrifice.

. The character of Black Widow, it is true, has always been under-exploited, especially in the action. If Whedon had managed in Avengers (2012) to put the heroine at the center of moments of bravery, her abilities as a killer are extremely limited against aliens or killer robots. Black Widow will have had the merit of revealing Natasha’s potential.
Nevertheless, the action scenes in Cate Shortland’s film are mostly unambitious, poorly filmed and, moreover, badly edited. This is a constant in American blockbusters, this fascination for sloppy hand-to-hand combat, without artistic vision.
Marvel Studios is a machine. The output has to be fast, and it shows in the final output. It becomes difficult for the big studios to consider long training sessions for the actors and to work on choreographies for a longer period of time. So we end up with dubbers who try to give the change and directors who hide the defects by filming most of the movements in a crude way to truncate the eye of the spectator.
It’s a pity, because a production such as Black Widow deserved this effort, a particular care on its action sequences to finally allow to reveal all the potential of Natacha.

The prison scene is also a source of disappointment. Trying to imitate Fast & Furious in the madness and the overkill, the film gets lost and sometimes forgets its spy movie side. Wouldn’t it have been better to be subtler in such a sequence ? I ask the question.

. The revelation of Taskmaster’s identity was the best kept secret of the movie. The revelation is powerful. Narratively, we can’t fault Black Widow on this aspect. The disappointment comes from her use in the action scenes.
If her first appearance against the Black Widow on a bridge in Norway is excellent, there is a problem : the lack of success. Let me explain. Technically, Taskmaster is superior to Black Widow. There’s no denying that. Many current blockbusters elevate their super-villains with superhuman abilities, as was the case with the recent Hobbs & Shaw, for example, and the character played by Idris Elba. However, this super-power has one major flaw, the lack of success.

At no time does Taskmaster manage to capture Natasha and Yelena never manages to get her hands on the capsules. Constant failures that discredit the antagonist and call into question his strength and intelligence.

. In Avengers : Age of Ultron, a sequence between Banner and Romanoff caused a reaction. When they talk about their relationship and their future, they only see misfortune. Banner is afraid to pass on his modified genes to a child while Natasha calls herself a « monstre » because of her sterility. A heartbreaking sequence, misinterpreted. It is not a question of calling sterile women (by choice) monsters, but of saying that The Red Room has deprived her of a choice, of a free will : that of founding a family. It is understandable then that in the face of this heart-to-heart discussion, Natacha may feel monstrous in Bruce’s eyes. A writing problem, a clumsiness that a simple sentence would have solved : a woman is not defined by her ability to fertilize.

The fertility of the Widows is a subject once again addressed in the film but with a disconcerting lightness. Depriving a woman of her reproductive organs, forcing her to undergo a sterilization operation is a barbaric act and the way Natacha and Yelena tell it, with humor, de-dramatizes the ignominy practiced by The Red Room. It’s a pity, as the film strives to show without concession all the horrors of Dreycoff…

If we are far from the cold and anxious atmosphere of a Red Sparrow – but is the comparison really relevant? – Black Widow has some nice assets, including this semi-origin-story that replaces Natacha Romanoff as one of the strong characters of the Marvel Cinematic Universe.
Cate Shortland’s film is not without its flaws, of course. From a narrative point of view, there are flaws that unfortunately impose the formula and the context, and the direction is not always at the level of requirement that we expect from an action movie, but the contract of entertainment is fulfilled. And honestly, isn’t that all we ask ? Or have we become less demanding with Marvel Studios productions ?
Finally, Black Widow is a more than honest conclusion for Natacha Romanoff. We only regret that her past has not been explored in its entirety because so much remains to be studied.
Oh and please, stop with Florence Pugh. The actress interprets her role precisely, imposes a rhythm that is her own, from there to say that her performance overcomes all the others, we should not abuse.