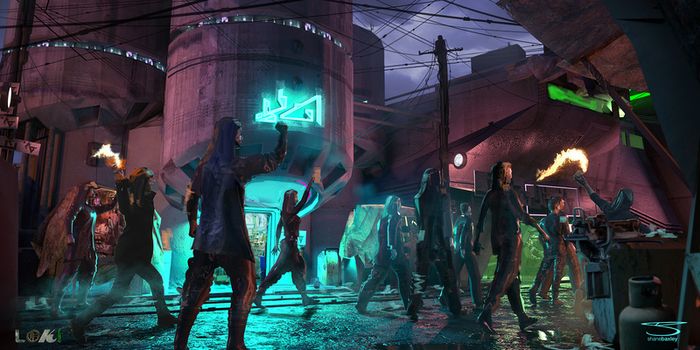 Shane Baxley is a concept designer.
His unique style and his singular way of apprehending geometry and curves, led him to work on movies like Alita: Battle Angel (which you can find the interview here) or Bumblebee but also on feature films from DC Comics (The Suicide Squad) and Marvel Studios (Captain Marvel, Guardians of the Galaxy: Volume 3).
In exclusivity, Shane Baxley comes back on the construction of Sheroo City, the small city within the planet Lamentis that Loki and Sylvie cross in the episode 3 of the Disney + series.

Designing an entire environment from scratch is never easy. However, for several years, Shane Baxley has made a specialty of it. Whether it is for video games or cinematographic productions, he manages to give life to diverse and varied universes by respecting his own logic. To create the city of Sheroo City, Shane Baxley explains his creative process and the way he proceeded : « Sheroo started with a very basic building blockout (See attached grey images). In this phase it’s really just about blocking in the buildings into the initial proposed backlot dimensions, checking sight lines, checking scale etc.
Then some simpler side view building blockouts were done to see how the buildings silhouettes felt next to one another.

« Once I had ~8-10 building designs I started laying them into the actually city layout, sometimes rearranging them to create better sight linse for possible keyframes, etc.
Then you get into further detailin of the buildings, lighting, textures, set dressing etc. »

Production Designer Kasra Fahrahani « wanted the buildings to have a brutalist style influence*. »
A duo work where Shane could nevertheless let his imagination run free : « The production designer gave me some reference images of brutalist buildings that he liked and would check in on me every couple days. Other than that I had a lot of freedom. »

* Brutalism is an architectural style that originated in the modern movement and was very popular between the 1950s and 1970s. It is characterized by the repetition of certain elements such as windows, as well as the absence of ornamentation and the « raw » character of concrete.

To conceive Sheroo City and to think about the Arch, « a month’s work » was necessary.
A tedious work : « I had to rearrange the city layout several times to make the scene where Loki and Sylvie are running through it shorter. » He said.

The city of Sheroo City has a well defined color code. Purple/pink and blue are predominant, colors that are often found in futuristic cities of science fiction movies such as Blade Runner or Ghost in the Shell…).
A color code that Shane Baxley links to bisexuality, a theme that the series addresses without complex : « In general bisexual lighting is used often in scifi… there’s lots of discussion on where exactly this came from… some say it’s a direct relationship to empowering being bisexual… which is sort of a futuristic theme in itself as the future has often depicted the idea of sex not being limited to one gender. »

There is also another reason for the use of these colors : « It just looks cool, creates a unique & unknown feeling as it’s the opposite sort of light spectrum one often sees in daily life. »

However, Shane Baxley does not work according to the colors he will use, even if he recognizes their importance : « Lighting is always key in design… especially with film/photography. That said I don’t rely on specific colors to create good design. You need to make sure there’s a nice transition of colors/warm to cools, etc. Other than that, if the design is good it should look good in every color as well as black and white. »

Concerning the symbols that can be seen on the buildings (see image on the right, taken from episode 3), the concept designer admits not knowing their meaning : « The graphic designers may have snuck in some secret codes but in my concept art I often just doodle in some alien looking graphics as place holders. »

Shane Baxley didn’t only design the city of Sheroo City. The Ark in which Loki and Sylvie had to escape from the planet Lamentis, is part of his other creations on this episode.
He tells us the origin of it : « The ark was going to be standing on its end (like the space shuttle) so it felt more like a piece of architecture than a traditional ship design. The form language needed to be different enough from the other buildings to read it as a ship, but still fit in the Lamentis world. »

For « budget reasons », several designs have been removed, including several vehicles and, in particular, motorcycles with which the protagonists and the police were supposed to move. As well as environments.
Below, the few concept arts of Shane Baxley which were never used for the episode 3 of LOKI :

Thanks to Shane Baxley for sharing these concept arts exclusively.
You will be able to admire his work again soon, as he will design episodes of the series KENOBI and the spin-off of Mad Max : Fury Road, Furiosa.

The LOKI series is currently available on Disney +.