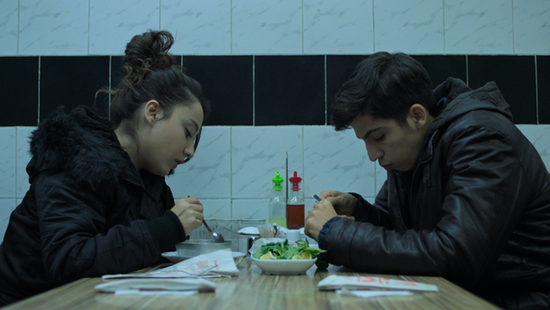 Selected in the Best Short Film category at the 2022 Cesar Awards (and in the short list for the 2022 Oscars), The Criminals is the new film by Turkish director Serhat Karaaslan. After an appearance at the Sundance Film Festival 2021, for which it received the Special Jury Prize for Best Screenplay, The Criminals continues its journey here in France.

Synopsis:
Late at night, a young Turkish couple is looking for a hotel to spend a romantic night. They are constantly turned away because they do not have a marriage certificate. Just when they think they have found a trickery, the situation degenerates…

How was the project « The Criminals » born and the desire to tell this story of two young lovers looking for a hotel room to have sex ?
It’s based on a true story, something similar happened to me when I was younger. The idea was in my mind for a longtime and I was looking for the best way to tell this story.
Once I created the character of the security guard character then the atmosphere of the script changed and it became much darker. This offered me the opportunity to mix up genres. Making a social realist film with elements of both thriller and horror was exciting.
Also, I wanted to make something about the young generation in Turkey. How does it feel living in Turkey nowadays as a young person ? Most of them dream of moving abroad. But many are constrained within their own families. I find it pretty sad.

The title appealed to me, « The Criminals ». That’s a shocking title. As Westerners, we are inevitably touched to see such a brutal reality because making love to the person we love, even in a hotel, seems so commonplace here. Can you tell us more about the vision, the almost archaic conception of Love in Turkey ?
Sometimes love can be a crime in Turkey. We have chosen this title because it has a certain irony. It questions who the real criminals are : the young couple who wants to make love freely or the people punishing them for doing so ? In the eyes of society the young couple are partners in crime even though if there is nothing criminal about them.
Love in Turkey is still mostly related to notions of family and marriage. Even in 2022 there is no sexual freedom, even more so for the LGBTQ+ community, their situation is very unfair and violent in Turkey.

In effect most of the hotels won’t accept a couple without a marriage certificate. This is true especially in small cities where even luxury hotels ask for this. You can still see today some hotels advertising as a ‘family hotel’, this means they are very strict about this. If they catch you, as in my film, they will treat the couple as if it were a prostitute and her client. I think the state should take its responsibility and tell hotels to stop checking their customer’s marriage certificates.

To support your statements, you confront a youthful face (played by Denis Altan and Lorin Merhart) with an older generation. Do you think that this youth, in love with freedom, will be able to overturn certain very archaic ways of living in Turkey and in the world ?
I hope the youth overcome this mentality, I think it’s inevitable to be honest. That’s why I wanted the film to end this way, I wanted to end this nightmare with a small victory which is the female character’s victory. I didn’t want the youths to feel guilty or ashamed because of what happened. The end for me is optimistic and is there to give hope even if the road is long.

It’s not only the strict rules that shock the youth. At the end of the film, two adults also seem to be afraid of this way of proceeding…
These adults represent a part of turkish society that is also shocked by these proceedings, maybe they are unmarried also… And they serve a comedic purpose too: following many tense sequences, I wanted something to break it up. At first, they are totally lost and don’t understand what it is they’ve walked into and when they do they want to run the other way, as we do. It’s a bit of a sitcom moment that the audience embraces because it needs to breathe and laugh after all the previous events.

In your way of filming, especially the passage in the hotel, there is something oppressive, almost sometimes even horrific. Did you choose these visuals to show the weight, the anguish that the Turkish youth must face ?
It’s an interesting question. I wanted the hotel itself to become a character, it’s a small microcosm of society. At every stage of making this film I was thinking about how to raise the tension and the filming of the stairs, passage, lift all contribute to this.

Can you tell us about the two excellent interpreters Denis Altan and Lorin Merhart ?
We started the casting 7-8 months before the shoot. The casting for this film was a bit difficult because of the sex scenes. Some actors were negotiating with me how much of their bodies would be shown or how I would shoot these scenes. So, after a lot of auditions and negotiations we found two great and brave actors.
We did a lot of auditions, 50+ for each character. When we watched Deniz’s audition, she caught our attention right away. Her performance was excellent and I loved how she interpreted ‘Nazlı’. It took a longer time to find the actor for Emre. Only 2-3 weeks before the shoot we found Lorin and then I auditioned them together. The chemistry between them was excellent, they looked like a couple.

Your short film has already received many awards and it is currently in the official selection of the Césars 2022 but especially in the short list for the Oscars 2022… Is it something that touches you all these awards and nominations and, at the same time, helps you get your message across ?We are all very happy and proud that our film is one of the 15 films in the race for the Oscars and Césars, the best part is that the film reaches audiences all over the world thanks to the Oscars and Césars. Awards mean being accepted, recognized. They open doors and create new opportunities for us to tell more stories and we need this.

There are Hollywood romantic movies and there is reality. And reality is often not what we would like to see, but it is necessary. With The Criminals, the Turkish director Serhat Karaaslan gives us the story of two teenagers looking for a refuge to spend a night of love. In a country with archaic values, they confront a fierce patriarchy, where sleeping with a woman and committing the sexual act are forbidden without a marriage certificate. Sailing with a certain melancholy and bitterness from hotel to hotel, they find a subterfuge to spend the night together. A carefree attitude that they will soon regret…
When he enters his beloved’s room, the story changes. Little by little, the effervescence gives way to the first apprehensions. Doubt creeps in, brilliantly orchestrated by a subtle scenario. Meanwhile, the hotel becomes a labyrinth, a trap that closes in on Emer and Nazlı’. Serhat Karaaslan then takes us into a new dimension, more horrific, where the tension, tangible, is fueled by the verbal violence of one of the agents of the hotel who surprises them and manages to force the door of their room. The beginning of a horror film for us, a nightmare for the inhabitants of Turkey and this freedom-loving youth. Because Serhat Karaaslan does not make a film, he films reality. It is all the force of his story, all its atrocity also.
The outcome seems uncertain as the students undergo the anger and danger of this man, determined to make them live hell. It is no longer the hotel and its employees that the two lovers face but the brutality of an entire country, its mentality, its narrow-mindedness. Supported by an anxious and oppressive direction, we hold our breath, while Serhat Karaaslan’s camera focuses on the faces, on the distress and fear of the heroes.
Then, the relief. A final liberating act, between tragi-comedy, like a glimmer of hope for the future…

The Criminals is a thrilling short film about a reality little known in the West. Without concession, Serhat Karaaslan shocks, sensitizes, to an appalling situation and makes us aware, by the same occasion, of our chance to live in a country like ours.
A powerful short film, which can not leave indifferent…‌