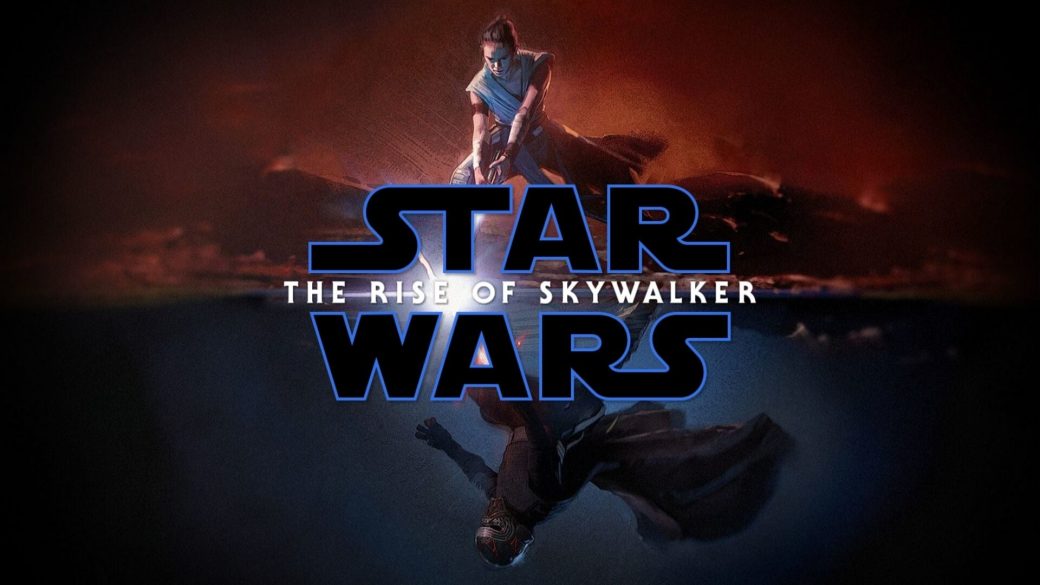 The Force Awakens, The Last Jedi, those two productions really had divided the hardcore Star Wars fans, the franchise lovers and many cinephiles around the globe. With The Rise of Skywalker, the challenge was twice as big for J.J Abrams: he had to hang up the wagons between the ideas imposed by Rian Johnson in The Last Jedi and his own, and conclude the saga satisfactorily, trying not to offend anyone. A lost cause ? Here’s my answer.

An Ascension at The Speed of Light

First observation, The Rise of Skywalker is a film that goes fast, too fast. From the outset, JJ Abrams sets the scene and supplants almost all of Rian Johnson’s work on The Last Jedi, with the back of his hand or, conversely, tries to bounce back on ideas he did not share. So, when the credits start, we can read : « The dead speak […], Palpatine is back. ». Yes, I admit it, it’s pretty violent. You brutally take the return of one of the most emblematic villains of the Star Wars saga in the face, without an ounce of subtlety, as if it had been acquired for a long time.
Announcing the return of Palpatine in a trailer was already a mistake. Introducing your bad guy into an opening credit scene is another. This introduction will reflect his scenario : awkward. Indeed, J.J Abrams will never get bogged down with details and rush straight ahead.
The abundance of script holes supports this feeling of speed, that feeling of a hotchpotch at an unprogrammed cooking. The characters go from point A to point B, in a chain of haphazard situations, in a deluge of facilities and inconsistencies as massive as the Death Star. Here are two examples.

This scenario speed is the main error of The Rise of Skywalker. It prevents, at the same time, from savoring the film in its entirety, and from getting emotionally involved in what the characters are living and feeling, during dramatic moments.

The Rise of Skywalker, which wants to be the end of an era, connects its pretentious fan-service without managing to move the public. Where The Force Awakens delivered an intelligent and nostalgic score, Star Wars IX only stupidly copies images, situations already seen, without an ounce of originality, without trying to transcend the nostalgic vibe into something authentic. The sequence that reflects this lack of creativity is the one where, for the umpteenth time, Palpatine is defeated by… his own lightnings. Bringing back Palpatine only to kill him once again by « electrocution », isn’t that the admission of a Failure ? Doesn’t this discredit such an emblematic villain ? Of course it does. Basically, putting Palpatine back on the scene reveals a major Hollywood concern : the difficulty for this industry to create new and significant figures of Evil capable of crossing the ages. It’s not trivial if Vader is present in Rogue One or if Michael Myers returns in frankly passable aftermath. This is symptomatic of an exhausted system. Convinced that Snoke did not have the charisma to seduce (and Kylo Ren never was considered a true villain), Rian Johnson broke up with it, forcing the return of Palpatine, who didn’t surely had asked for nothing. And, it was too late to attempt to bring up a Dark Plagueis.

Finally, this poses another problem : In The Last Jedi, Snoke wanted Rey to die. Palpatine however needed her alive. So if Snoke was a creation of Palpatine and if he manipulated him, please explain to me where the consistency is!

Lazy, J.J Abrams never gets what he had achieved with The Force Awakens : the sublime, the iconic. If there are some beautiful images, reinforced by an enticing photography and the magnificent symphony of John Williams, as well as very interesting scale games, the whole thing sometimes seems sloppy. The lightsaber fight between Kylo Ren and Rey is proof of that. A soft confrontation which releases no energy, no blazing dynamism, no hardness in the movement. We can blame The Revenge of the Sith for a lot of things, but the duel between Anakin and Obi-Wan was by far the most intense, the most violent, the most thrilling saber fight of the saga, where all the dramaturgy of the film takes shape, through excess of rage which results in movements of extreme fury. A scene also choreographed with an extreme precision.
We can also note the little inventiveness of the final battle, which was very static. Where was the imagination ?

Rey’s origins were an essential part of this new plot. In Star Wars VIII, we learned from Kylo Ren that Rey’s parents were just peasants and, therefore, that she was “nothing”. A semi-lie on which J.J Abrams will bounce to create the long-awaited revelation: Rey is the granddaughter of Palpatine. Again, few explanations on that. Palpatine thus had a child, it is acquired, a proven fact, do not try to understand it, we are told so. Some will accept this revelation, others won’t. Personally, it’s a disappointment. I appreciated the fact that Rey was “nothing”. It made her unique, precious, like Anakin, a slave of Tatooine, who became a legend in the past.

Rey’s quest for identity will therefore end with the film. When an old lady asks for her name, she will answer : Skywalker. A way for Rey to honor a memory, a story, in short, her real family. An ascent for the young woman who will no longer be unknown. She now has a past, a legacy, everything that makes up an identity, and for which she will have to build a future.

Torn between the desire to reconnect with the remains of a tragic past and the little light still sparkling in his heart, Kylo Ren will have desperately tried to make his way between the inheritance of his family and his sudden emancipation. Finally, Ben will follow – more or less – the same path as his grandfather Vader, a promising jedi who has switched to the dark side, promoted to the head of an Empire, before an act of redemption which will bring him back to the light and put an end to the reign of a tyrannical Emperor. Unfortunately, if Darth Vader’s redemption is a strong, thrilling and overwhelming image, Kylo Ren’s one suffers from such awkward writing that its emotional impact is diminished. First of all, we don’t know where this turnaround comes from : is it because Rey saved his life? Is it because he feels the death of his mother and that death reaches him in the depths of his being ? Is this the conversation with Han Solo’s ghost ? This awareness is rather vague and abrupt. Then his sacrifice. Being Force sensitive does not mean being able of mastering ancestral techniques in a few seconds. If Rey manages to heal others, by giving him a share of his vital energy, this requires intensive training. Definitely weeks and weeks of work. Ridiculous then, when Ben transfers all his vital energy to Rey, simply by closing his eyes and in less than half a minute ! How are we supposed to feel emotion for such a sequence, with such flagrant facilities, just because it was meant to be beautiful on screen?

When Disney released the first trailer for Star Wars : The Rise of Skywalker, many had decried the fact that Kylo Ren was redesigning his helmet, which he had abandoned in the previous movie. It was, moreover, an interesting scene from the Last Jedi as Kylo Ren smashed his helmet after the words of Snoke calling him « a child with a mask ». And, the reasons which pushes Kylo Ren to put on again his helmet, a year after (only a year !), are never really given. Once again, we must assume.

Leia and the Force

This is one of the scenes from The Last Jedi that made the Star Wars fandom scream: Leia uses the Force. How could we approach this masquerade? Well, Leia is a Skywalker. There would be no reason why she could not, with training, develop Force-related capabilities. To see her use powers is therefore rather coherent. Furthermore, I remind you of this sentence pronounced by Luke to Leia in The Return of the Jedi : « The Force is strong in my family, my father had it, I have it, my sister has it. You have that power too. ».
But, indeed, this sequence in Star Wars VIII arrives in a very awkward way, so awkward that J.J Abrams will have to give weight to this revelation – that everyone seems to have forgotten – through a flashback, in order to also give credibility to Rian Johnson’s work. Flair play on this one J.J!

Captain Phasma, Snoke and the Knights of Ren

Captain Phasma : Introduced in The Force Awakens, abandoned in The Last Jedi, the character of Captain Phasma was the link between Finn and his past as a Stormtrooper. If Star Wars VIII had the opportunity to deepen this relationship and all the “mythology” surrounding the Stormtroopers (recruitment, ideology, sectarian organization), Rian Johnson will completely deny the character created by J.J Abrams. We sometimes feel this regret in The Rise of Skywalker. J.J repeatedly tries to reintroduce ideas he wanted to develop with Phasma, especially when Finn meets a fellow Stormtrooper-deserter.

Snoke : After Snoke’s death* in The Last Jedi, many questions remained unanswered. Who was he ? Where did he come from ? How did he pervert the soul of Ben Solo ? What training did he give him ? So many legitimate questions that will never be answered and, swept away by a word spoken by Palpatine : “Snoke was one of my creations”. It was the only way for J.J to turn the page on him. However, a bitter taste will persist : what would Snoke’s creator have done if Johnson hadn’t killed him ?
That’s a new proof that the continuity between SW7, SW8 and SW9 had its limits.

*A quick note on Snoke’s death and a question: how could a Sith Lord be fooled so easily, and not feel that Rey’s lightsaber next to him was moving? The scene of his death was incredibly stupid.

The Knights of Ren: « They are demons. ». This is how a stormtrooper guard qualifies the Knights of Ren, when they first appeared in Star Wars IX. The tone was set! And, we foolishly thought we would have a demonstration. We won’t. The Knights of Ren are reduced to the rank of extras and then, of cannon fodder, in a scene where Ben will face them and defeat them, without much difficulty. After some researches, I learned that the Knights of Ren were made up of fallen apprentices from Luke Skywalker, corrupted by Kylo Ren. A track never explored and which, however, would have offered a livelier fight between Force users.

However, I look forward to a new Star Wars trilogy.
However, can Star Wars keep a full story without Empire or First Order ? Because the franchise rested until now only on political oppositions, an opposition between a Resistance and an Empire, more than on ideological oppositions between Jedi and Sith. Simply following a Jedi or a group of Jedi chasing Sith, will that be attractive enough ?

I remember this scene with the arena, where the Sith cheered on Palpatine and his evil plan. It was the first time that so many Sith had been seen together in one place. This is where we see that this trilogy may has missed something… something new.