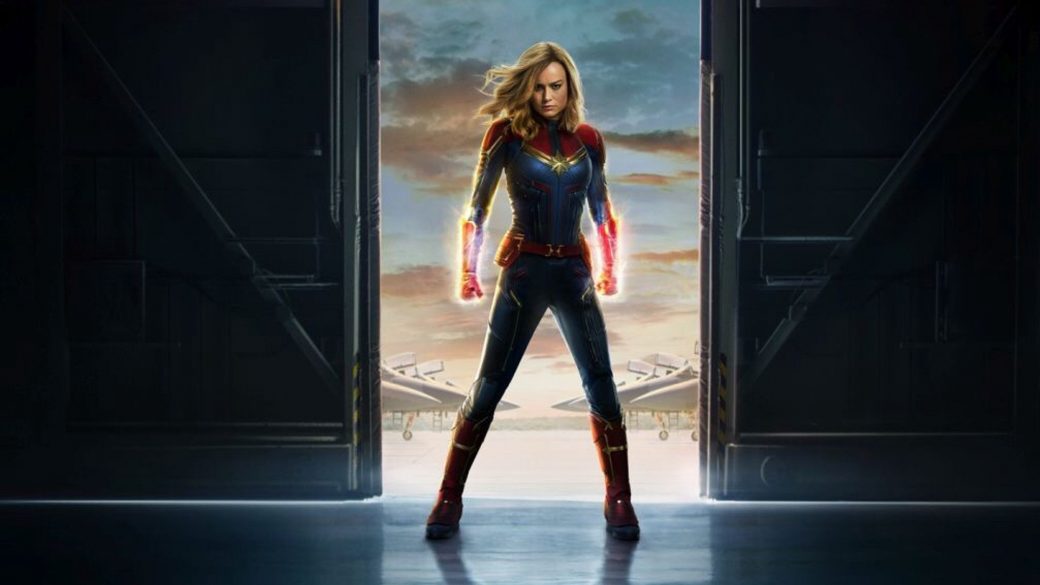 THE CAPITAINE CINEMAXX HAS WATCHED ANOTHER CAPTAIN * SPOILERS *

Since Doctor Strange in 2016 – and without including Avengers : Infinity War – I must admit -and with great despair – that the Marvel Studios no longer makes me dream. Spider-Man : Homecoming and Ant-Man & The Wasp were pleasing but too linear in their scenario composition and way too dull to be exalting. Black Panther bet on his cast to monetize their expenses (and it worked!) at the expense of a real political statement, whereas the humoristic side of Thor : Ragnarok had made every last bit of credibility to the Gods of Mischief and Thunder (however Thor will finally get back his stature in Infinity War). Thanks to the Russo Brothers.
So I was waiting for Captain Marvel since this specific post-credits scene with Nick Fury. However, by presenting Captain Marvel as the Humanity’s savior, we obviously become more exigent. The most powerful woman of the universe had the duty to make us drool, to make us believe she’d be able to keep up with Avengers 4’s stakes.

Where Infinity War had a well-mastered communication allowing us to see only a tiny bit of the plot, and even adding fake sequences (ex: heroes running in the forest in Wakanda) and lying on some pictures (ex: the number of stones on Thano’s Gauntlet while fighting Captain America), Captain Marvel is the exact opposite.
With a plethora of posters, trailers, TV spots, funko pop figures revealing the identities of the characters etc… Most of the movie has been spoiled, so it was harder to be surprising. This abusive marketing was meant to a bad presage, and I felt that an average production, unlike Homecoming or Black Panther with the hype for these characters so high they had to be subtle. However, the will to show the world the first women superhero able to defeat Thanos took upon reason and they were like « Hey! Our heroine is Badass, independent and strong ! ».

And I were right. Captain Marvel is an introduction without ambition, without major stakes, with a disjointed scenario and superficial dialogues written by a 2 years old kid approaching the mockery, just like Brie Larson’s slow-motion « super-heroical postures ». Preposterous!
Of course the movie is entertaining, but it’s not enough. With a budget of $152 billion, the public has the right to expect more from the production, with a crazier staging like the Guardians of the Galaxy (which had roughly the same budget) who had stunning action scenes with a true aesthetical production (ex: chase of the guardians on Xandar) as well as little war on Xandar as a colorful, fast and intense final fight with the Nova Corps’ ships bonding together to build a shield around Ronan’s ship. Astonishing!
If I chose this comparison, it’s because Captain Marvel was selling us « an intergalactic war between two extraterrestrial races » : the Krees and the Skrulls. And we had the feeling of being betrayed. Indeed the movie is dodging it with most of the action taking place on Earth to escape from a too complicated work. Thus limiting the conflict between the Krees and the Skrulls.
I may be expecting too much, I am well aware of this. But demand must predominate on the simple excitement of finally seeing a Marvel Studio super-heroine movie. When we see Captain Marvel’s action scenes,
« amateurism » is the first word coming to my wind. The movie has no ambition (ex: Train scene – edited with the feet by the way ) as well as a lack of imagination (ex: the chasing scene in the desert between Minn-Erva and Maria – a rip-off of Star Wars or Independence Day… So original), is frustrating. Maybe the problem comes from the power of the character? How can we expose an almost invincible heroine?

The scenario adapts himself. If the action scenes were to predictable in case of major conflict, we can see it during the final sequence where she is able to destroy a whole squadron of ships (the Avengers have nothing to fear if Thanos comes with an armada of spaceships), the producers preferred to emphasize on a human story to escape from those pointless sequences. However, this story family lacks shades and implies that the Krees are the bad guys and the Skrulls the good guys. Without shades, everything is quite Manichean. Moreover, when we’ve read the Kree-Skrull and Secret Invasion comics, we are obviously disappointed by the ending. The fans were expecting a lot form the Skrulls and their morphing ability, and a bit of disappointing can be felt at this point. As always, we’ll have to wait for a second opus to get the real premises of a war between the two species.
The over-powerful side of the character brings another problem: the identification. The climax of the movie is its final act as you know. Seeing a hero struggling, on the edge of collapsing physically and morally and being able to overcome his pain and sadness to fight back is exciting and that’s at this moment that the dramatical tension is at its peak and the thrill takes over. Captain Marvel took this away from us under some sort of invisibility tainted with cheap feminism.

But why wouldn’t the most powerful woman in the universe couldn’t have weaknesses? Why isn’t there any villain powerful enough to keep up on a fight with her? Is that what we will see in the future with Endgame or Captain Marvel 2 & 3? Movies with no real stakes because feminism doesn’t allow a heroine to be weak in this kind of blockbuster? Furthermore, it is more difficult to identify to this kind of character than to a Black Widow whose life is constantly on the edge at every fight she’s involved in.
Of course, Carol Danvers has a human aspect and her amnesia makes her vulnerable to the eyes of the public, but it’s only minimal and badly handled, thus remaining poorly credible because this amnesia never made her a fragile person regarding her limitless powers compensating for this lack. She knows it, she plays with it, and the rare emotional moments no longer have the same impact.

And let’s go fapping over the great feminism! Wonder Woman ha dits lot of stupid sentences: « it’s a great feminist movie, Diana is arrogant, nonchalant and likes to tease men. » and it’s on again with Captain Marvel. But honestly, doesn’t the women deserve better than these cheap super-heroine stories? Even if I am happy that it starts moving, they should think about giving roles that goes beyond the clichés like Anna Boden and Ryan Fleck’s movie.
For exemple : Emancipating from our mentor by refusing to fight and sending him a blast in the chest isn’t what I call emancipation but scenario simplicity. Avoiding the fight is indeed a way to not show a weak heroine because, on hand-to-hand combat, she might have been vulnerable (and maybe less attracting?). Making Brie Larson to take poses with some sort of cool style doesn’t give a strong and independent image to the Woman, it’s just laughable.

Goose is the comical element of the show and personally it didn’t bother me at all compared to critics who hated he’s presence.
That gives me a transition to the humor of the movie. Every Marvel has its lines, its repetition or situation comic, and Captain Marvel is no exception. However, it might be one of the rare Marvel where the humor is badly exploited, badly mastered.
To get back to Goose and Nick Fury’s eye, the disillusion is huge. It might be one of the dumbest comical situations throughout the MCU and takes-off every bit of credibility to the character of Fury whose accident leading to the loss of his eye is no heroical act. No need to keep on playing the mysterious and over-serious, you’re no longer credible dude!

As everyone seems to enjoy the duo Captain Marvel/Nick Fury, I will allow myself to put my point on it. Even if some sort of alchemy seems to come out from this duo and that an undeniable dynamism gives some “peps” to some dull sequences, I’d like to highlight the fact that Samul L. Jackson’s acting is unbearable. He keeps on caricaturing himself over and over, always playing in the same register without any deeper meaning.
Whereas Brie larson, she seems to struggle with believing that she’s impersonating such a powerful character, and her acting is quite laughable, especially her facial-expressions when she’s taking a badass pose (by the way there is, way, way to much throughout this movie), she has an undeniable charism and a lot of potential.

To conclude, Captain Marvel remains a formatted product that has not the same ambition as a Guardians of the Galaxy, nor the courage of a Doctor Strange, and with stakes so less captivating that the movie becomes boring.
A Jude law unequal and absent, some secondary characters (Yon-Rogg’s team, Ronan, Coulson…) pushed back to the rank of walk-on role and thus under-exploited, a heroine so powerful we end up detaching from her and special effects sometimes disgusting (3 weeks after Alita : Battle Angel, it’s painful to watch), Captain Marvel is a deception after such a long waiting time. There will remain some comical moments, some bravery and a post-credit scene really appealing, in brief, ephemeral novelties.

1 thought on “CAPTAIN MARVEL : MY REVIEW (IN ENGLISH)”