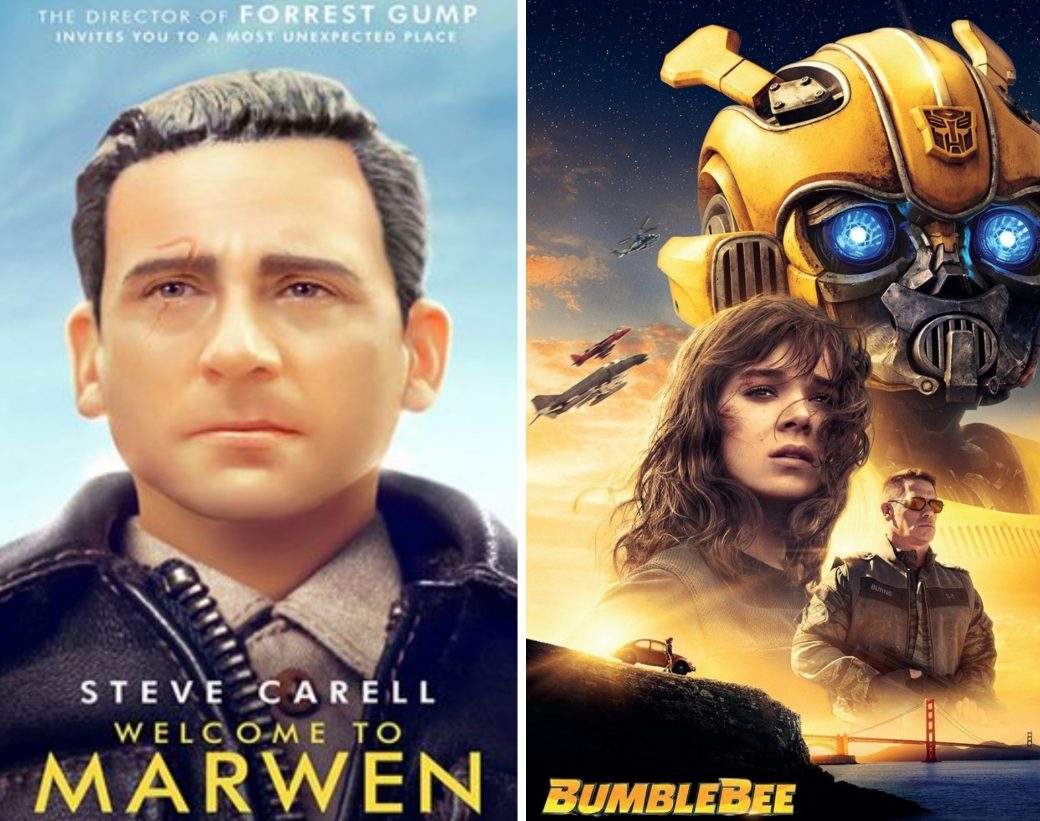 Robert Zemeckis is certainly one of Hollywood’s most talented filmmakers when it comes to telling human stories, sometimes drawn from real facts. Forrest Gump, Alone in the World, Flight and even The Walk, are models of writing and staging, for generations of young directors. And with Welcome to Marwen, the creator of the cult saga Back to the Future, proves, once again, that at age 66, he is still an outstanding storyteller, an incredible storyteller.

SYNOPSIS : After being beaten up in a bar, Mark Hogancamp stayed in a coma for several days. When he wakes up, he is struck by amnesia. He will then create an imaginary world, Marwen, a fictitious Belgian village during the Second World War. The creation of this village in miniature becomes an obsession. Like a self-therapy, Mark invents imaginary places that he inhabits with dolls representing mainly women of his entourage and his past. In this imaginary world, his alter ego Captain Hogie meets the Belgian witch Deja Thoris, GI Julie or Caralala. All of this gives him the physical and mental strength to get back to reality: Mark has to go to the trial of his attackers.

This story is inspired by real events, that of Mark Hogancamp.
In April 2000, at the exit of a bar in Kingston, New York, Mark was attacked by five men, leaving him for death. His only crime, having confided a few minutes earlier to his future torturers, he loved to disguise himself. Broken, both mentally and physically, Mark Hogancamp will find a second life, thanks to art, which can be discovered in the documentary Marwencol, released in 2010, and which Robert Zemeckis was inspired to achieve its long-mage, Welcome to Marwen.
A film at the heart of the news therefore, since the LGBT + aggression are increasing in recent years and, we think including the young Marin, beaten after seeing the defense of a homosexual couple and who must, today, relearn to live.
Here, our hero, Mark, has lost all his memories dating from before his assault, part of his motor skills and is subject to post-traumatic stress disorder. He will then offer himself a second chance by becoming home, a world of dolls, which he will be the hero, under the pseudonym of Captain Hogie. Surrounded by five beautiful young women, each representing a resident of her village, Mark will build his own universe, his own stories and photograph his dolls in adventurous breaks.

The main enemies of Captain Hogie, the Nazis, allegorical figures of Mark’s executioners. They will be permanently 5 in number.
Hogie represents what Mark will not be able to be or would have liked to be, a hero like James Bond or Indiana Jones, a charming, strong, proud, courageous and combative man, surrounded by young women at the generous bosom, with seductive curves and angel face. A symbol of his fantasies, Mark never fails to highlight feminine beauty, with sincerity and respect, while he also assumes his fetishism for heels by giving Captain Hogie, among other things, these feminine accessories, like a snub to his attackers.
To evoke his passion for the heels, Mark has, in addition, a very beautiful saying : « The heels, it is not a fetishistic object. It’s the feminine quintessence. ». Suddenly, a simple fetishism often characterized by perversion, becomes a poetic act, almost divine, where the woman is put on a pedestal and not considered a vulgar object of desire. When Mark Hogancamp puts on one of his dolls or takes care of them, this is perpetually done in a romantic rather than unhealthy operation.

The question now : a hero, a virile man, must he be in the image of a society inclined to impose our aesthetic codes? Should a brave knight conform to a certain manhood imposed by the many fables read to children for centuries?
By staging his main character, wearing high heels, Robert Zemeckis, even if he does not invent anything, breaks the myth of the modern hero, the one with the protruding muscles, the devastating smile and the tailor-made costumes.
Small note : I highly recommend the South Korean film, Man on High Heels, you will see how a man wishing to become a woman, happens, despite everything, to put tough mandates to Mafiosi (laughs). Magistral! Or listen to Eddie’s song Preto’s Kid. Sublime truth!

As for the witch, it is the symbol of her failures, her demonic subconscious, the one that slowed her down in her daily efforts. Ironically, by making this doll, he builds himself his barriers, creates his own obsessions, his own fears. Finally, as Tony Stark said in Iron Man 3 : « We create our own demons. »
However, does an artist ever bring to light all his phobias, to better overcome them afterwards? Mark’s Nazis are his enemies of yesterday. To put them on the stage, to seek an end to its history, is also, unconsciously, to try to find a solution to its problems and when he confronts the wicked witch, he has the choice to remain anchored in a moribund past or to move towards the future, serenely (it is not for nothing that his decision is made in the car Back to the Future).
So art, here, photography, that will serve as an outlet for his uneasiness, his shyness, his lack of courage, while we must confront the people who destroyed his life. By sublimating the reality with Marwen, an imaginary world and Manichean where everything is possible, Mark will gradually regain, at the same time an inner peace, but also the strength to face his worst nightmares, of which the evil witch, worthy representative of his lost ambitions (an artist’s life, a love life, etc …), as I explained previously.
Beyond this poignant story, sublimated by the interpretation of a Steve Carell at the top, it is especially the animations and the technical prowess of the film that we will remember. After giving life to cartoons characters in Roger Rabbit’s Who Wants to Go or an unconventional motion capture in The Express Pole, Robert Zemeckis delivers a new artistic performance for Welcome to Marwen. His little animated dolls (again in motion capture) are blatantly realistic, manage to convey emotions as pure as those of a real actor, disturb to the border between fiction and reality. The introductory sequence, the one in which Captain Hogie is flying a plane while pursued by German fighters, is confusing: is it real or not? The skin of the character, his joints, his voice, everything rings true.
Finally, the transitions between « animated » scenes and scenes in real shots are all consistent with the feelings of Mark, his emotional state, his fears, his joys, which blurs therefore this clear distinction between reality and fiction.

In conclusion, Welcome to Marwen, is above all a film about tolerance, a hymn to the difference, but also a work full of hope, for millions of people touched by the dramas of life. Art as an outlet is what Robert Zemeckis brings to light here, with a certain brilliance and a lot of lyricism. Never give up ! 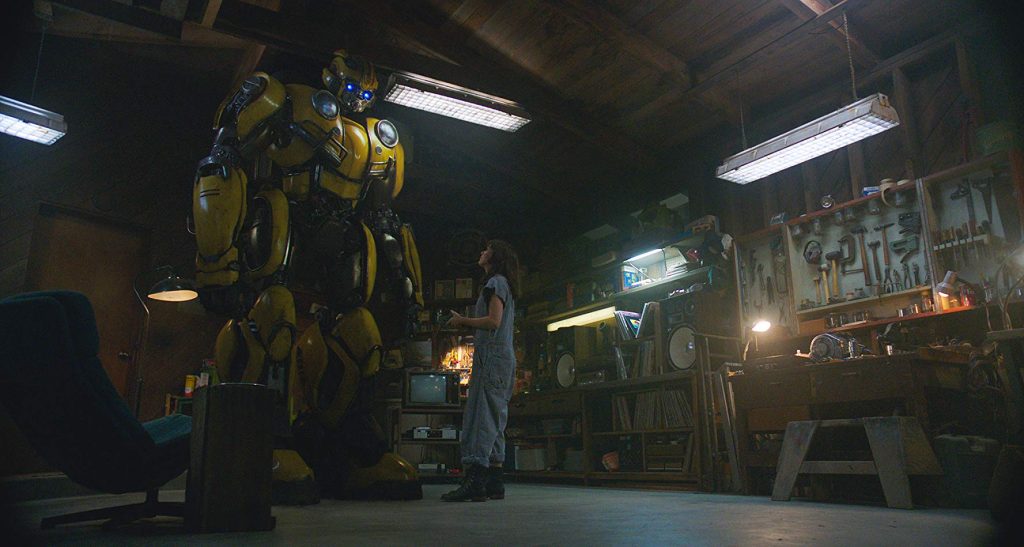 While the Transformers saga is in perdition since the fourth opus’ disaster and a fifth below everything, Paramount Pictures decided to release the first spin-off of the franchise created by Michael Bay, Bumblebee, focused on the cutest yellow car, with a very clear objective: reactivate the greenbacks factory, but also restore the audience’s interest for Transformers after a $500 Million loss in between Age of Extinction (1.1 Billion) and The Last Knight (600 Million).
At the direction of this spin-off, Travis Knight, known for the direction of Kubo and the Two Strings, an animated movie greeted by the audience and that received 3 Best Animation Movie Awards (at the Boston Online Films Critics Association, at the National Board of Review Awards and at the British Academy Film Awards) and had been nominated in two Academy Awards (Oscars) categories including for the Best Visual effects. This guy rocks! However, we’re talking about a blockbuster, as well as the future of a franchise that, thanks to Bumblebee, might improve its reputation. So according to me, picking this stage director was a risk taking… Until Steven Spielberg came to the production and that changes everything! And instead of giving us yet another Transformers opus full of explosions, building destructions and battles opposing Autobots and Decepticons, Travis Knight and Steven Spielberg chose to deliver a perfectly mastered tale, in the way of E.T.

I’m not quoting E.T as a provocation. I don’t know if my fellow journalists highlighted it (I didn’t read any articles about Bumblebee), but Bumblebee’s construction of the scenario is extremely close to E.T. Extra-Terrest. Beside the era the action takes place (the 80’s and all of its references), it’s in particular the introduction scene (an U.F.O falling from the sky, the « threat » being chased by some sort of Governmental Agency, all of this in a forest), the shelter (a residential suburb), the family that will host the alien (A 4 members family. Here, a mother worried for her child – like E.T. – ; a step-dad and two kids including Charlie Watson, the heroine), the hero’s characteristic (lonely, conflicted, excluded from every school group…), the cohabitation (sometime disastrous, sometime funny), the communication (both E.T and Bumblebee try to communicate using terrestrial means like tv or radio) and a few little sequences (the hero’s fake death, car chase with the army, the villain being human and hating a creature he hated without knowing, etc…). All of that contributes to that « Spielbergian tale » feeling.
The single big difference is that Bumblebee willingly remains on Earth whereas E.T goes back in space.
We can also notice the opening sequence of the movie, in the way of Man of Steel, revealing for the first time the fall of Cybertron, a short yet ambitious sequence, with some very aesthetical camera movements (for example Optimus Prime’s fall). Nonetheless, whereas Zack Snyder’s full-length feature took the time to deepen the origin of the conflict and the different point of view between the Zod and the El, Bumblebee never gave us answers regarding the conflict between Autobots and Decepticons and what started the war between them.

Finally, even though Bumblebee won’t be remembered as a cult movie such as E.T, Travis Knight’s movie delivers a nostalgic opus, full of common sense and great feelings thanks to its composition, through a production highlighting this touching and sincere relation between a young girl lost and a robot just as much as she is. A direction with charm, with an accent on the main heroes’ development instead of a plethora of action sequences or old familial cliché, which we often begrudge to the Transformers saga, especially the fourth and fifth opus where every scene between Cade and Tessa feels fake.
The rhythm of this film admirably switches from an everyday-life scene to more explosive ones, with this feeling of tale and not a final blockbuster whose only goal is to subjugate the audience at the expense of the scenario, which is an essential component to fully and emotionally immerge ourselves in the story we are trying to share with the public and the movie’s major stakes. And Bumblebee succeeded effortlessly to establish clear stakes and allows us to identify ourselves to each and every protagonist.

To conclude, Bumblebee has this carelessness, this innocence, this 80’s charm with a slight B-Grade feel (in the good way and represented by, we must admit, a quite good John Cena) that a bit lacks to the 21th Century’s Hollywoodian Productions.
Yes, Bumblebee is the great surprise of the end of year. Will that be able to revive machine? Only time will tell, but with an opening week-end at only $21 million in the USA and a total of $157 million in 6 days, it doesn’t seem off to a good start. A quite sad reality when we see the quality of that movie which may be one of the best written of the franchise.