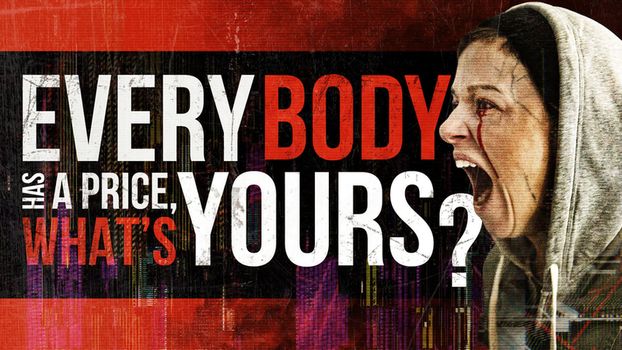 This October, director Fabien Dufils will present his new feature film Implanted to American audiences. For this exceptional event, I met the screenwriter David Bourgie and the American actress Michelle Girolami. Together, they talk about the adventure of Implanted, a deeply human adventure where love and friendship are truly at the heart of this ambitious project.

Synopsis :
Sarah, a struggling young woman, becomes a test subject for an experimental medical AI implant. When the implant turns sinister and takes control of her body, Sarah fights to survive with only one choice: to live or die.

Formerly called Headhache, Implanted was born from the imagination of Fabien Dufils. It’s been an uphill battle for this filmmaker who fought to make this anticipation feature film, which finished shooting in October 2019, after a first version shot in 2018 but whose result did not meet his expectations.
Implanted is the typical project that is built step by step, that needs time, to mature to exist. Failures are productive and that’s how Implanted can now boast of being a true American-style futuristic thriller with, nevertheless, that French-touch that seduces.

Fabien Dufils also wrote (alongside David Bourgie), produced, directed the photography and the cast, a jack of all trades who masters his camera, his frame and his light, to the point of delivering a powerful aesthetic work and a visceral disaster scenario. Implanted is the kind of film where the « anticipation » aspect is not a pretext for a grandiloquent spectacle, on the contrary. Fabien Dufils develops an urban side that anchors the story in a frightening reality that is taking shape as I write these lines.

Today, the film has found a distributor, Gravitas Ventures, and will be released in several American theaters and no less than 40 platforms. A consecration for Fabien Dufils, this French expatriate who dreams of breaking into a fierce Hollywood industry where the competition is tough.

The Implanted script also looks at an industry, that of medical guinea pigs. A business that represents the 4th largest economy in the United States and that David Bourgie himself witnessed: « When I was young, I needed money. I had registered on PFIZER’s lists to be a guinea pig. My family convinced me not to do it. It’s a reality. You need people and animals to test drugs. That’s something I used in the writing. Where we then went into fiction is that we wanted to deal with the subject of Artificial Intelligence as a full-fledged being that will decide to take control over Sarah’s body. LEXX is endowed with a terrifying narcissism. But that kind of scenario is potentially possible tomorrow, you know. What we thought of with LEXX is more or less already in development. Some scientists today are trying and succeeding to give emotions, feelings to A.I. ».

Initially, LEXX existed but did not interact verbally with Sarah. It is in the second version of the script that this idea appeared : « Indeed, in the second version it took a more important part. When you have a character who evolves ¾ of the time alone (Sarah), you need constant interaction. In the first version of the script, the Artificial Intelligence managed her daily life, whereas afterwards, we decided that the A.I. should also be a real life companion. It had to accompany Sarah and her fall. ».

A shift that makes Fabien Dufils’ film visceral : « You have to understand that LEXX, in the first part of the film, is really a friend. She acts for the good of Sarah. Takes care of her. So you don’t expect her to want to hurt her. We really wanted the spectator to be disturbed by this radical change of behavior and then to feel the pain that LEXX will cause to Sarah and to feel imprisoned as she can be. Because LEXX cannot be removed. It is implanted in an area where the person does not have the ability, on their own, to remove it. ».

Michelle Girolami : an actress in the making

« We cast more than a hundred actresses over four months », says director Fabien Dufils. Among them was the young Michelle Girolami, originally from Montana. A real « artistic love at first sight » for the filmmaker, who « fell in love with this modern face with her short hair and her big blue eyes that catch the image. ».
A meeting that sounded, thereafter, as « an evidence », he explains. « We had a coffee together. In this kind of film, there are two things : to have a talented person, yes, but above all you need an ultra-flexible actress. The human dimension was important beyond the talent. So with Michelle, it went really well. She’s a very authentic girl, who was excited about the project. ».

Fabien Dufils now hopes that Implanted will « help Michelle in her career ». With this role, Michelle Girolami delivers a poignant, intense performance : « she goes through all the states in this film, she plays very well, she is a very good actress ».

A feeling shared by the screenwriter David Bourgie : « Personally, when I saw the way she interpreted it – already, she was not interpreting, she was Sarah -, I was bluffed by her game. She is just in her emotions. We really feel all the emotional phases that she goes through. There is an emotional evolution of her character in relation to what she is going through that is incredibly accurate. I think Michelle really understood what Sarah’s character was going through. ».
Implanted is a difficult feature film because « it’s all about her. If Michelle hadn’t been in tune with her character, the whole movie would have fallen apart. ».
A judicious casting, which allows Implanted to be part of its great films, both by its careful and calibrated direction, its chiseled dialogues but also, by the play of its actors and in this case its powerful lead actress.

The character of Sarah accepts an experimental « treatment » to pay off her debts and help her sick mother. She is then implanted with an A.I., LEXX, which ends up controlling her host’s body. Fabien Dufils worked for a long time on the subject of medical guinea pigs in the USA, which represents the 4th largest economy in the country, before writing his film. Is it a strong subject that touched you ?
It is certainly something I think about. I think medical testing is necessary, but I have concerns about the ethics of how some studies are administered. Historically there have been instances of deceit and exploitation, and I think « Implanted » echoes those concerns. It brings up some interesting questions about the ethics of experimentation and consent.

Is there anything else that convinced you to embark on the « Implanted » project? And, what appealed to you about the character of Sarah ?
What drew me to the project was also what appealed to me about Sarah. She’s a character in a situation where she is physically being controlled and yet she still has agency. Even when LEXX is threatening Sarah with physical harm, she fights back and finds ways to rebel. I love that Sarah is always looking for ways to escape. I also love the bond she has with her mother. Sarah goes to great lengths to protect her mother as best she can.

The role of Sarah is a rather physical role. How did you prepare yourself to play Sarah ? And, did you do some research on your own to better understand the stakes of the film in order to faithfully transcribe them to the screen?
It sure is! I was already an avid runner and I was taking ballet classes regularly prior to filming so I had a base level of physical fitness. Both of those practices made filming the more physically demanding scenes much more manageable. After watching the trailer and seeing how much running there was just in that, my best friend started calling me Tom Cruise. Ha !

I also did a lot of research while preparing for this role. I read a great deal about medical testing and microchip implantation. I also did a lot of research around Sarah’s very specific ailments and symptoms. I come from a medical family (my mom is a retired nurse, my dad is a retired doctor, my brother is a doctor, and my uncle is a doctor) so I was able to ask them about all of Sarah’s various medical and physical issues as well as her mother’s illness.

There is also a lot of work on the body and movement, especially when LEXX tortures you …
For those moments, I consulted my medical family members about what specifically Sarah would be feeling based on how LEXX was torturing her. Fab let me explore different physical expressions of the pain. He’s very skilled at capturing improvised moments. Sometimes we would try out a few different movements and set a mark or an eye-line. For the most part, we didn’t choreograph or block those moments extensively. We just let the moments play out in different ways as Fab captured it all.

Fabien Dufils is a French director. Did you have any reservations about shooting with a director of French origin ?
No, none at all. I’ve worked with directors from all around the world. With any one of them, I don’t think of their nationalities as being their defining characteristics. I think of how they work with actors, how they envision their works, their personalities, their aesthetic styles. When I think of Fab as a director I think about what a great collaborator he is !

How did your first meeting with Fabien go ?
Oh it was great ! We hit it off right away and I could tell we were going to work well together. I could tell we have similar work ethics and that we’re both very passionate about our work.

What kind of director is he on the set ?
He’s very patient and collaborative. He creates a very welcoming, warm environment on set. But he’s also very efficient. It’s amazing how many shots we were able to cover each day. He works quickly but thoughtfully.
[…] Something that stands out is his aesthetic acumen. The visual narratives of his films are stunning! He has a strong work ethic and leads by example.

Part of the film was shot in Paris. Was it your first visit to the City of Light ?
It was not. I love Paris ! I’ve been there several times and every time I go, I can’t wait to plan my return. I hope to work on many more projects there. But I should start practicing my French.

How was your shooting in Paris ?
It was wonderful ! The weather was great, the locations were beautiful, the cast and crew were amazing !

What memories do you have of your shooting in Paris ?
I remember it all very fondly. Filming driving there was really fun! I live in New York so I never drive. Going from never driving to cruising outside the Louvre in a very expensive and awesome car was great!

The film has found a distributor and will be released in October, you are eager to show the film to the general public ?
I can’t wait ! We’ve all put so much love and time into this film that I’m excited to share it !