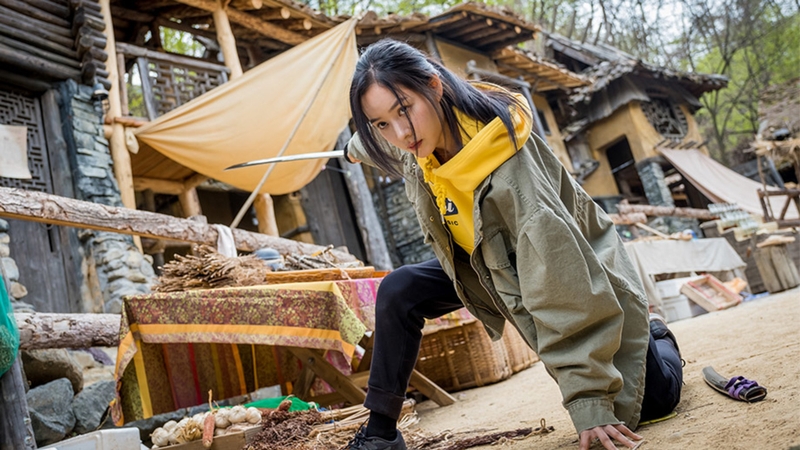 Presented at the Brussels International Fantastic Film Festival, in the Taste of Korea category, Slate is the new film by director Bareun Jo. It features a martial arts enthusiast who manages to realize her dream by getting hired on a movie set.

A mix between ARMY OF DARKNESS and KILL BILL, passing by the American western and the inspiration of Japanese mangas, Slate is a succulent blend of styles as many and varied for a result as bloody as enjoyable.

How did you get the idea for Slate? I wondered if there wasn’t an autobiographical part to it, that of a director who wants to succeed at all costs in this business, just like his heroine.
I always wanted to make a sword-action movie. Most of sword-action movies are a historical drama. But a historical drama is expensive to make and our budget was seriously limited. Therefore, I needed to create a world where everyone can fight with a sword in modern location and costume without any legal restriction. Of course, it is not possible in modern time. But it can be possible in cinema. Therefore, I decided to create the world of cinema where everything is possible, a mixture of my shattered images from past cinema and manga.
Slate is a film about film, how it takes the audience into a different world, to experience something new and fun, and after all, how it changes their view of a reality or themselves. In short, Slate is a symbolic story of so-called Cinematic Experience. We came to the movie theatre, we enjoyed it, we were touched, and earned something at the end.
I am not sure if there was an autobiographical part to it. If there was, it must be an unconscious coincidence.

When seeing Slate, we can’t help but think of Quentin Tarantino’s KILL BILL. Was it a work that inspired you? Does American cinema inspire you in general?
Tarantino is a huge inspiration to me. And Tarantino, as far as I know, gets a huge inspiration from B-movies and Japanese manga. So, did I. Yeon-hee, a heroine of Slate, is also strongly influenced by Tarantino’s Kill Bill.
Another inspiration came from American Western Movie. I was such as big fan to the genre since I was young. Many images in Slate come from American films and Japanese manga. For example, the tone of the film and soundtrack are inspired by Western films. Character designs are inspired by Japanese manga and the video-game Yakuza.

There is another film that gave a huge inspiration. It is called Samurai X. Samurai X has a totally different action style. There is no slow-motion nor flying dagger. Instead, they swing the sword really fast. I mean…super fast.

Did she undergo a special physical training and katana training sessions for the film? And, did all the actors go through the same training?
Even though Jihye-Ahn had a good physical condition and sword skills at the beginning, she had to endure a month of hellish training. Yes. We only had a month of training. It is low-budget film. We didn’t have a choice. All actors, including Ji-hye Ahn, took 6 hours training every day except on the weekends.

Did she have a stunt double?
No, I swear to god. Not a single cut. She did everything by herself. All the actors are the same. They did every action scene by themselves. I did not want to use a stunt double. If we used them, camera angles and movements would have been seriously restricted. I hate that. I wanted to show their action with the less cuts and movement possible. In order to do so, they had to do the action scenes without a stunt.

The film has a nice message to it: persevere to get what you want, and become the hero of your own life. It’s a strong moral, is that what you wanted to convey with Slate?
Yes. We are important as we are. We don’t have to try to be the important. That is the true meaning of the word hero. It is a message that I wanted to share with the audience.

Thanks to the director Bareun Jo for this little moment, and to the BIFFF team who made this meeting possible.